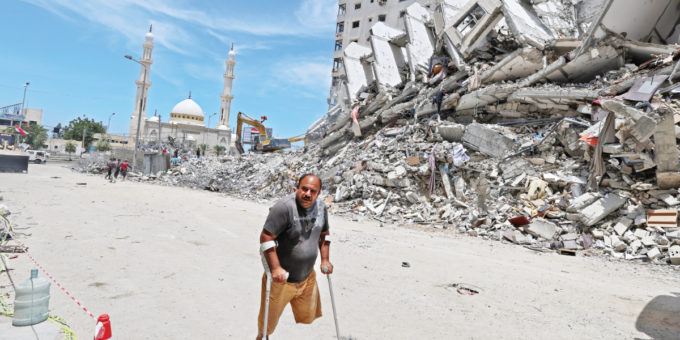 GAZA CITY: Some hope has returned to Gaza resident Ayman Dahman upon learning that his apartment building, completely destroyed during Israeli airstrikes last May, would be reconstructed.

Dahman has despaired over the past months, but Egyptian and Qatari statements regarding the acceleration of the reconstruction process have restored optimism.

Dahman and his family of six lived in a five-story residential building inhabited by 10 families, in the north of Gaza City.

After its destruction, he moved to live with his son in a small two-room apartment. Once the war ended, he relocated to a rented house, which was paid for by the UN Relief and Works Agency for Palestine Refugees in the Near East.

UNRWA provided $1,500 in rent allowance and $500 for the purchase of basic home furnishings for each victim who lost his or her home during the war.

Dahman said that the Ministry of Public Works and Housing in Hamas-run Gaza contacted him a few days ago to prepare the engineering plans for the building in preparation for reconstruction.

On Oct. 19, the Egyptian Committee for the Reconstruction of the Gaza Strip announced the launch of its first development project in Gaza: the construction of Al-Rasheed Street in Beit Lahia, northern Gaza.

At the same time, head of the Qatari Reconstruction Committee Mohammed Al-Emadi, currently in Gaza, announced that the coming days would witness an acceleration in the reconstruction process.

Hamas had received Egyptian promises during its leadership’s visit to Cairo earlier this month to speed up the pace of reconstruction and to provide trade and economic facilities at the Rafah border crossing between Gaza and Egypt.

After the war, Egypt pledged a grant of $500 million as a contribution to reconstruction and sent engineering delegations to remove rubble in preparation.

Undersecretary of the Ministry of Public Works and Housing Naji Sarhan, said that the Egyptian grant projects include the construction of three residential cities in Beit Lahia; Jabalia, north of Gaza; and the Al-Zahra area, south of Gaza City.

According to the agreement, these three cities will include 2,000 housing units, giving priority to poor and low-income people. The construction of bridges and roads also will be supported.

Sarhan said that Egyptian officials promised — during meetings in Cairo with an official delegation from Gaza about two weeks ago — to start the reconstruction of the residential high-rises soon.

Egyptian crews had contributed to removing the rubble of damaged high-rises, as well as the construction of the first residential city in northern Gaza, he added.

The talks with the Egyptians, according to Sarhan, resulted in an agreement to operate the largest number of local contracting companies.

It was also agreed to import all the materials needed for reconstruction from the Rafah crossing to ensure the operation of local factories and to provide facilities for the movement of contractors and businessmen through the crossing.

The local authorities estimated the direct losses in the Gaza Strip during the war at $479 million.

Sarhan said that the direct losses are related to the destruction that afflicted the housing and infrastructure sector, as 1,500 housing units were destroyed, and 880 units were severely damaged. Hundreds of units were moderately and slightly damaged, with the value of reconstruction estimated at $145 million.

A great deal of damage was also caused to the infrastructure, including public buildings, roads, energy, communications and sanitation, with reconstruction estimated at $293 million.

Losses were also incurred in the sectors of economy, trade, health, education and agriculture, apart from indirect losses caused by the war.

Sarhan estimates that Gaza needs $2 billion in order to revive it after many years of wars and siege.

Palestinians see the latest Egyptian move as coming within a context of coordination with the US administration, which hopes to establish stability in Gaza.

A few days before the Hamas meetings in Cairo, Gaza reconstruction was discussed during talks between Egyptian President Abdel Fattah El-Sisi and US National Security Adviser Jake Sullivan.

Hamas-affiliated columnist Majed Al-Zibda believes that the recent Egyptian meeting with Hamas is consistent with the vision of the US administration, which desires to contain Gaza and ensure stability there so to avoid any deterioration that could lead to new confrontations.

Israeli newspaper Haaretz reported earlier that Egypt and the US were pressuring Hamas and the Palestinian Authority to work on forming a new unity government with the aim of pushing forward long-term stability and the reconstruction of Gaza.

Please Don’t Feed the Whale Sharks? Fishing Town Says It Must, to Prosper.