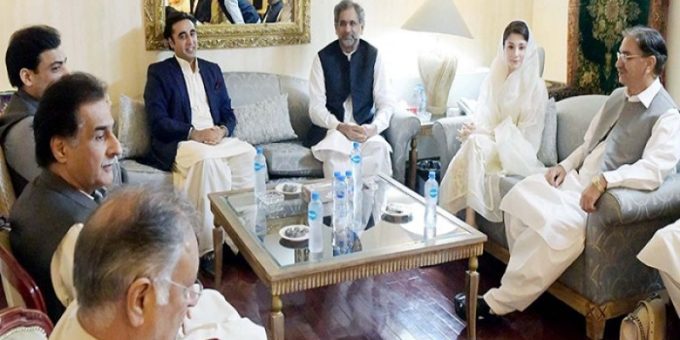 The Opposition parties on Thursday decided to hold consultations with the government on more than 20 bills only after it receives proposed legislative details in writing from National Assembly Speaker Asad Qaiser.

The ruling party had earlier announced to approach the Opposition regarding these bills related to electoral reforms and other issues. A joint session of Parliament convened on Wednesday was postponed after PTI allies raised concerns on the bills to be presented for approval.

The NA speaker had said he would contact Opposition leaders for electoral reforms and their reservations would be addressed.

Following the development, a steering committee of the joint opposition in Parliament held its meeting in the chamber of the Leader of the Opposition in the Senate, which was attended by Opposition Leader in the Senate Yousaf Raza Gilani, Syed Naveed Qamar, Senator Sherry Rehman, Senator Farooq H Naek, Shazia Marri, Sardar Ayaz Sadiq, Khawaja Asif, Khawaja Saad Rafiq, Senator Kamran Murtaza and Shahida Akhtar.

Talking to the media after the meeting, parliamentary leader of the PPP in the Senate, Sherry Rehman, said it was decided that the steering committee would consider further action upon the receipt of a written request from the speaker and after consultation with the party leadership, adding, “There is no question of approaching the government or speaker on our part to seek cancellation or reversion of the joint session they had called.”

The PPP senator asserted they discussed the strategy on the pending legislative business that included the recently promulgated ordinances.

“The steering committee will consider further action after receiving legislation in writing from the speaker regarding the bills and ordinances to be discussed in the joint session,” said Sherry, adding that all those bills and ordinances could be discussed in the parliamentary committee as “we believe in the supremacy of parliament and dialogue but obviously, our leadership will take the final decision after the steering committee deliberations.”

“They are afraid of being exposed and of facing defeats in Parliament while we have our numbers in Parliament and support of the people of Pakistan,” Sherry claimed.