Twelve opposition MPs from Rajya Sabha have been suspended from parliament’s Winter Session and the opposition has condemned the suspension, saying it is against the rules. The list of suspended MPs includes Shiv Sena’s Priyanka Chaturvedi and Anil Desai, Trinamool Congress’s Dola Sen and Shanta Chhetri CPM’s Elamaram Kareem and six Congress leaders.

A meeting of the Union Cabinet is scheduled to be held in Parliament today, the third day of the ongoing winter session. The meeting will be held around 1 pm.

The Winter Session of Parliament began on Monday amid protests and sloganeering by the opposition, who wanted discussion around the Farm Laws Repeal Bill, in an attempt to guarantee farmers some of their other demands that go beyond just the repeal of the three farm laws.

The winter session is likely to conclude on December 23.

Here are the LIVE Updates on Parliament Winter Session 2021: 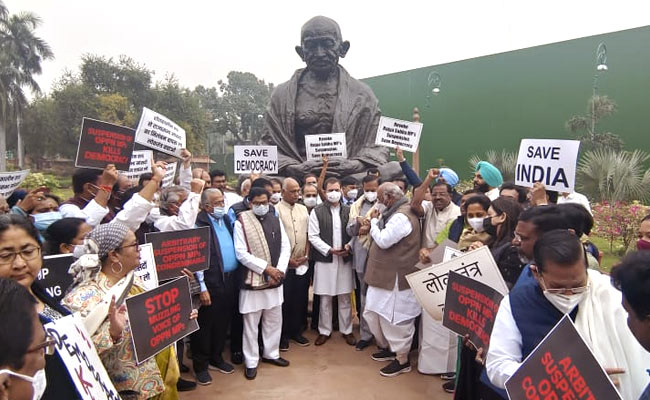 We demand the revocation of suspension of 12 Opposition members of the Rajya Sabha: Mallikarjun Kharge

We are demanding the revocation of suspension of 12 Opposition members of the Rajya Sabha. We will hold a meeting and decide the future course of action: Leader of Opposition Rajya Sabha, Mallikarjun Kharge pic.twitter.com/QjAUpiyJGd

Winter Session of Parliament | Congress Rajya Sabha MP Shaktisinh Gohil has given a suspension of business notice in the House over the issue of ‘price rise of essential commodities like food grains, edible oils, petrol-diesel and LPG cooking gas.’

Rajya Sabha to discuss and pass the Dam Safety Bill, 2019.

The IT Committee Reports on ‘Suspension of Telecom Services/Internet and its impact’ and ‘Ethical Standards in Media Coverage’ will be tabled in Parliament.

All Congress MPs (both Lok Sabha and Rajya Sabha) to protest near Gandhi statue against the suspension of 12 MPs. Congress leaders Sonia Gandhi and Rahul Gandhi will also be present.

Govt may not be able to fund elections where EVMs are not used: Fawad

In Saudi Arabia, Quiet Changes May Ease Tensions With Biden
2021-01-20