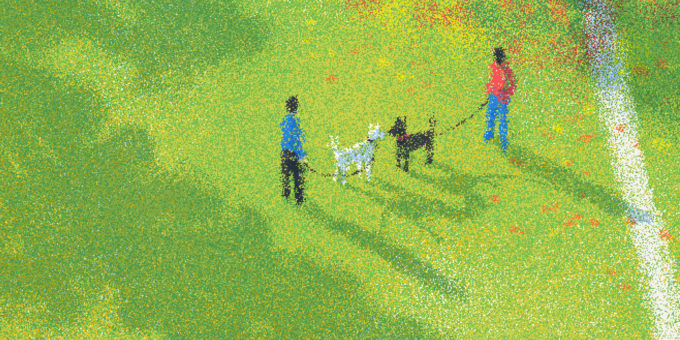 My greatest example of the magic of trivial conversation came from my late father. He was named “funniest-friendliest person” by the local newspaper in the small Texas county I was born in. Really. That’s a real award. My dad had friends across the political spectrum. He saw a person’s ability to find a moment of levity — a laugh about the Aggie vs. Longhorn rivalry — as more important than the person’s political affiliation. He saw the demonization of your political opponents as a character flaw, not a mark of purity or passion.

It wasn’t that he didn’t think politics mattered — he lectured me on the importance of voting. He simply thought that cordiality and the civil trust it engenders mattered more. Granted, he’d never use the words “cordiality” or “civil trust.” He’d call it not taking yourself too seriously and being a good neighbor. As a kid, I watched him perform some kind of daily alchemy, building bridges with simple conversations, crossing racial, political and ideological lines while checking his mail or depositing a check. He called forth a mutual humanity between people. It astonished me then and now.

I see moments of this in my own life. I moved states recently and feel the loss of seemingly unimportant local relationships I’d built where we lived before. I have no idea if my favorite former barista and I shared any political or ideological beliefs. We likely disagree on important issues. But I don’t care. I know he adores his infant niece and I regularly asked how she was doing. He is working to get through grad school, and I found myself genuinely rooting for this person I barely knew.

Each of us is more than the sum of our political and religious beliefs. We each have complex relationships with the people we love. We each have bodies that get sick, that enjoy good tacos or the turning of fall. We like certain movies or music. We laugh at how babies sound when they sneeze. We hurt when we skin a knee. The way we form humanizing, nonthreatening interactions around these things taps into something real about us. We are three-dimensional people who are textured, interesting, ordinary and lovely.

The consequences of a breakdown of social trust are political, making it possible for large amounts of people to think political difference may necessitate secession. But they are also spiritual and emotional. A 2020 Pew study found, “The less interpersonal trust people have, the more frequently they experience bouts of anxiety, depression and loneliness.” Neglecting small talk doesn’t only make us hate each other more; it also makes us unhappy with our lives.

Of course, to heal the deep divisions in our society we need profound political and systemic change. But though we need more than just small talk, we certainly do not need less than that. As a culture, our conversations can run so quickly to what divides us, and this is all the more true online. We cannot build a culture of peace and justice if we can’t talk with our neighbors. It’s in these many small conversations where we begin to recognize the familiar humanity in one another. These are the baby steps of learning to live together across differences.

As we rebuild our ordinary lives again as Covid recedes, one of the first and most important things we need to re-establish is a habit of talking with those around us about nothing that will ever be considered a hot take. There is a profound political and spiritual need to see our ideological opponents as, first and foremost, humans like us. The future of American society really does depend on two people who believe wildly different things having the ability to have a pleasant conversation about the weather and walk away with the feeling that they are each a little less alone.

Have feedback? Send a note to HarrisonWarren-newsletter@nytimes.com.

Tish Harrison Warren (@Tish_H_Warren) is a priest in the Anglican Church in North America and the author of “Prayer in the Night: For Those Who Work or Watch or Weep.”

Arab coalition: Over 200 Houthis killed in strikes on Juba and Al-Kasarah

After Being Scratched and Punched, Trump Wax Figure Is Removed
2021-03-20