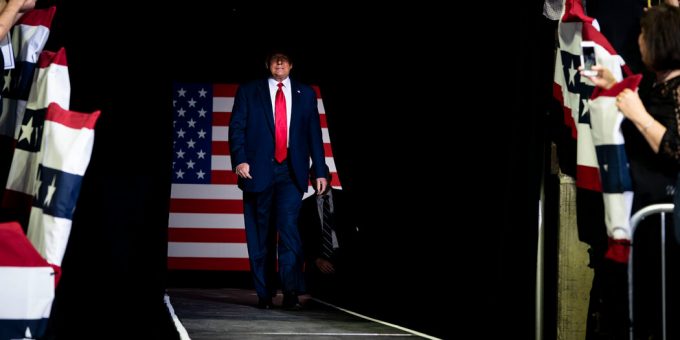 Listen and subscribe to “The Argument” from your mobile device:

What do Trump supporters talk about when they talk about 2020? This week on “The Argument,” Ross Douthat hosts a special intra-right debate over whether conservatives should support Trump in 2020. He plays “moderate squish” (i.e., NeverTrumper) to Pro-Trump conservatives Dan McCarthy, the editor of Modern Age, and Helen Andrews, a senior editor of The American Conservative. They disagree with Ross about the president’s handling of the coronavirus and argue against his ultimate question for Republicans in 2020: Should conservatives actually hope for a Trump loss in November?

How to listen to “The Argument”:

Press play or read the transcript (found above the center teal-colored eye) at the top of this page, or tune in on iTunes, Google Play, Spotify, Stitcher or your preferred podcast listening app. Tell us what you think at argument@nytimes.com.

I’ve been an Op-Ed columnist since 2009, and I write about politics, religion, pop culture, sociology and the places where they intersect. I’m a Catholic and a conservative, in that order, which means that I’m against abortion and critical of the sexual revolution, but I tend to agree with liberals that the Republican Party is too friendly to the rich. I was against Donald Trump in 2016 for reasons specific to Donald Trump, but in general I think the populist movements in Europe and America have legitimate grievances, and I often prefer the populists to the “reasonable” elites. I’ve written books about Harvard, the G.O.P., American Christianity and Pope Francis, and decadence. Benedict XVI was my favorite pope. I review movies for National Review and have strong opinions about many prestige television shows. I have four small children, three girls and a boy, and live in New Haven with my wife. @DouthatNYT

“The Argument” is a production of The New York Times Opinion section. The team includes Phoebe Lett, Paula Szuchman and Pedro Rafael Rosado. Special thanks to Brad Fisher and Kristin Lin. Theme by Allison Leyton-Brown.