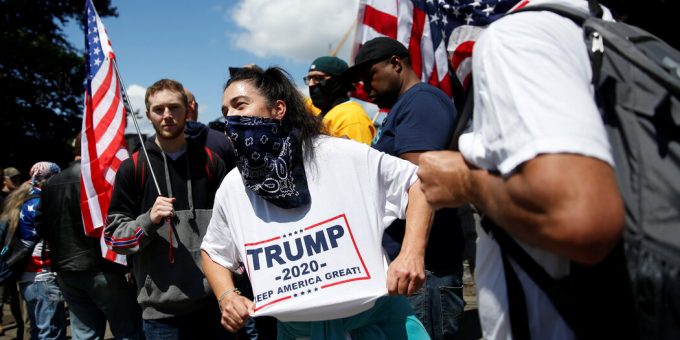 Or consider a 2019 paper, “False Equivalence: Are Liberals and Conservatives in the United States Equally Biased?” by Jonathan Baron and John Jost, professors of psychology at the University of Pennsylvania and N.Y.U., who write, “Nowadays we read that liberals are every bit as authoritarian as conservatives; as rigid and simple-minded; as intolerant; as prejudiced.”

The authors found it

ironic and more than a little bewildering that social psychologists are drifting into this relativistic view of morality and politics just as authoritarian conservatism (and illiberal hostility to democratic norms) seem to be reaching new heights of popularity and brazenness not only in Trump’s America but also in Erdogan’s Turkey, Orban’s Hungary, and Netanyahu’s Israel.

Baron and Jost also cite studies suggesting that those on the right are more susceptible to authoritarian appeals:

Conservatives score higher than liberals on measures of personal needs for order and structure, cognitive closure, intolerance of ambiguity, cognitive or perceptual rigidity, and dogmatism.

Liberals, they write, “perform better than conservatives on objective tests of cognitive ability and intelligence” while conservatives “score higher than liberals on measures of self-deception” and “are more likely than liberals to spread ‘fake news,’ political misinformation, and conspiracy theories throughout their online social networks.”

In a 2018 paper, Baron argues for the necessity of flexible thinking in a democracy:

In order for a democracy to function well (both for its own citizens and outsiders), its citizens need to endorse three (somewhat synergistic) social norms, which I called cosmopolitanism, anti-moralism, and actively open-minded thinking.

The whole strength and value, then, of human judgment, depending on the one property, that it can be set right when it is wrong, reliance can be placed on it only when the means of setting it right are kept constantly at hand. In the case of any person whose judgment is really deserving of confidence, how has it become so? Because he has kept his mind open to criticism of his opinions and conduct. Because it has been his practice to listen to all that could be said against him; to profit by as much of it as was just, and expound to himself, and upon occasion to others, the fallacy of what was fallacious.

It may be, however, that the very complexity of thought and resolve proposed by Baron and Mill would be resisted, and indeed resented, by many on the right.

The authors cite studies suggesting that this linguistic divide is persistent: “The Readability and Simplicity of Donald Trump’s Language,” published in The Political Studies Review and

One study showed that

the speeches of liberal US presidents score higher on integrative complexity than those of conservatives, as measured by the presence of “words involved in differentiation (exclusive words, tentative words, negations) as well as integration of different perspectives (conjunctions).”

conservative political bloggers use less complex language than their liberal counterparts and conservative citizens use language that scores lower on integrative complexity than liberal citizens.

Separate studies of the language used by presidents — both “The Readability and Simplicity of Donald Trump’s Language,” and an analysis of the language used by the last 15 presidents on the blog Factbase — concluded that President Trump speaks at the lowest level of all those studied, as measured on the on the Flesch-Kincaid index. As Factbase put it:

By any metric to measure vocabulary, using more than a half dozen tests with different methodologies, Donald Trump has the most basic, most simplistically constructed, least diverse vocabulary of any president in the last 90 years.

Some scholars argue that a focus on ideological conflict masks the most salient divisions in the era of Donald Trump: authoritarians versus non-authoritarians.

Karen Stenner, the author of “The Authoritarian Dynamic,” emailed me on this point to say that

“What we’re facing,” she continued,

is an authoritarian revolution — not a conservative revolution, the term is inherently contradictory — which in the U.S. has been creeping up since the 1960s.

clearly distinct from what I call “laissez faire conservatism.” In fact, in cross-national research I consistently find that these two dimensions are actually negatively related. If anything, authoritarians tend to be wary of free markets and more supportive of government intervention and redistribution, perhaps even schemes of equalization and progressive taxation.

For Stenner, the “overriding objective of the authoritarian is always to enhance oneness and sameness; to minimize the diversity of people, beliefs and behaviors.”

In a 2009 paper, “ ‘Conservatism,’ Context-Dependence, and Cognitive Incapacity,” Stenner wrote:

Authoritarianism is a functional disposition concerned with maximizing “oneness” and “sameness” especially in conditions where the things that make us one and the same — common authority, and shared values — appear to be under threat.

Threat, she continued, sets in motion an “authoritarian dynamic” that activates

In her email, Stenner argued that “non-authoritarian conservatives, opposed to change, dedicated to upholding laws, and to the defense of legitimate political and social institutions that underpin societal stability and security” are a crucial pillar of democratic governance.

In the real world, she continued, “it is the authoritarians who are the revolutionaries.”

Because of this authoritarian revolution, here and abroad, Stenner contends that

Stenner makes the case that the authoritarian revolution began in the 1960s: “Once the principle of equal treatment under the law was instituted and entrenched by means of the Civil Rights Act and the Voting Rights Act,” traditional conservatism — “fidelity to the laws of the land and defense of legitimate institutions” — took a back seat to authoritarianism “as a factor driving expressions of racial, moral and political intolerance.”