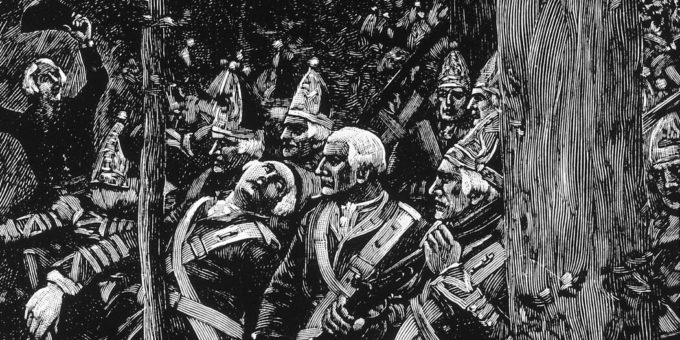 So a world where the French somehow held on to their territories might have been more Catholic (obviously a good thing) while offering more possibilities for Indigenous influence, power and survival than the world where England simply won the continent.

There’s a terribly poignant moment at the end of Anderson’s “Crucible,” when tribes of the Great Lakes and Ohio River Valley, under the Ottawa leader Pontiac and others, begin to rise against the British shortly after the French retreated from North America. The British imagine that French agents must still be around stirring up trouble, but the reality is that the Native Americans still understand themselves to be in a relationship with the French king and imagine that their war can help bring France back to their aid. But no: They’re alone now with Anglo-America, and foredoomed.

Imagining an alternative timeline, a history in which New France endures and a more, well, “French and Indian” civilization takes shape in the Great Lakes region, isn’t exactly the stuff of the patriotic American education that I wrote about last weekend.

But it also makes a poor fit with contemporary progressive pieties, in which organized Christianity is a perpetual scapegoat for the mistreatment of Native peoples — since it was arguably the power of the church and the Catholic ancien régime in New France, relative to the greater egalitarianism, democracy and secular ambition in the English colonies, that helped foster a more humane relationship between the French colonizers and the Native American population.

Once you recognize that kind of deep historical complexity, you can go in two directions. Along one path lies a kind of cynicism about almost every aspect of the past, where the reader of history is encouraged to basically root for nobody, and the emphasis is always on the self-interest lying underneath every expression of idealism. The French might have modeled what seemed like a kindlier form of colonization, but they were only following their own self-interest as greedy traders and proselytizing Catholic zealots. The New England colonies might have pioneered what seemed like an impressive form of egalitarian democracy, but they achieved their wide distribution of property by ruthlessly crushing the Pequot and the Wampanoag.

This is the mood that I sense, for instance, in Taylor’s “American Colonies” and its sequels, “American Revolutions” and “American Republics” — the last out just this year, and much praised for its disenchanted view of the early-1800s United States. These books are capacious histories, remarkable works of synthesis, in which you sometimes get the sense that apart from the occasional sympathetic victim, the author finds very little in hundreds of years of history to actually admire.

That mood has its place in historical analysis. But continuing my attempts to propose solutions to our current K-12 history wars, I want to suggest a different path, in which the kind of patriotic spirit that made me root for the British at Fort William Henry as a child and the kind of speculations about a Catholic-Huron imperium that I can entertain as an adult are both appropriate.