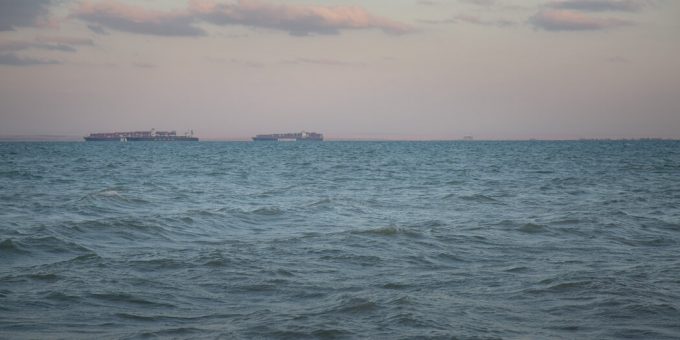 In the end, a full moon succeeded where puny machines could not, wrenching the mammoth barge out of the Egyptian mud in which it became wedged six days earlier. A spring tide finally set the Ever Given and its enormous stack of 18,300 shipping containers afloat again, drawing cheers from Egyptians on the shore and a virtual world beyond.

Before long, some 350 freighters blocked from traversing the Suez Canal hoisted anchor and began moving through; insurers mournfully took out their abacuses, and people near and far went back to their far drearier crises of pandemic, ailing businesses, wars, racism, autocracy and refugees.

Not that this was a minor crisis. Shipping is still the primary means of moving things around the world, and the 150-year-old trench through Egypt is a critical shortcut between East and West. In 2019, almost 19,000 ships made the passage with about 1.25 billion tons of cargo, including some 15 percent of the world’s container shipping capacity. An estimated $9.6 billion worth of freight passes through the canal daily in normal times; other losses included $95 million in revenue for Egypt, plus disruption of supply chains and shipping schedules for months to come.

But that’s not what it was about for most folks; what generated the drama was the astounding scale of the vessel, the biblical echoes of its ordeal and the challenge of figuring out how to pry loose something the size of a prone Empire State Building that had become wedged between the banks of the canal. This ship is crazy big — the longest aircraft carriers in American service today, the Gerald R. Ford class, are 200 feet shorter than the 1,312 foot, 2-inch Ever Given.

The photo of what looked like a toylike excavator scratching at the sand under the beached, iron leviathan became the icon of the saga, prompting speculation on what something of these dimensions might look like elsewhere, say on the Ohio or the Mississippi Rivers. The longest lock on the Ohio is 1,200 feet, noted The Herald-Dispatch of West Virginia, but at least the Ever Given could do a U-turn in its wide channel. One online tool made it possible to see exactly how the Ever Given would fit in, say, the East River, or the stream behind your house.

Social media, inevitably, lit up. There were suggestions on how to dislodge the ship (“My ambitious plan to free the boat is to push a huge cotton swab up the canal,” “There needs to be considerably less Egypt for this boat to go away”); encouraging words for the big ship that couldn’t (“You are NOT too much. You are ENTITLED to take up space. If the Suez Canal doesn’t have room for you that is the Suez Canal’s problem.”); psychological musings (“There was something deeply comforting about the boat being stuck”); fantasies (“imagining some sort of Spartacus moment where all 300 waiting boats charge into the canal at once, clogging it irreparably”). And, when it finally got free, there arose a chorus of disappointment (“PUT IT BACK, PUT THAT BOAT BACK IN THAT CANAL RIGHT NOW”).

Back on the serious side, the Ever Given has shone a spotlight on many issues of global sea shipping, which still accounts for 70 percent of total international trade. Container ships have been steadily growing in recent years, so that those of the size of Ever Given can’t fit into the Panama Canal and can only barely squeeze through the Straits of Malacca. Yet bigger and bigger ships will soon be afloat, all sailing under the curious international mishmash of the way oceangoing shipping operates — the Ever Given is owned by a Japanese company, operated by a Taiwan company, registered in Panama and managed by a Germany company. The Taiwanese company, Evergreen Marine, has 11 ships the size of Ever Given, all their names beginning with “Ever G.”

The six-day stoppage also demonstrated how easily maritime choke points can be sealed off, and at what cost. Choke points on sea routes have been a source of conflict through much of history, and the saga of the Ever Given demonstrates just how vulnerable they remain. China, which is hugely dependent on importing oil and iron to fuel its growth, has focused much of its foreign policy in recent years on keeping its trade avenues secure.

This time around, there was no foul play. A burst of powerful wind swung the Ever Given around and wedged it between the banks of the canal. It might have remained there for weeks had it not been for a fortuitous full moon on Sunday, one that raised what’s known as a perigean spring tide — when the moon is at perigee, or closest to Earth, and the sun, Earth and the moon are aligned, causing tides to “spring” higher than usual. According to CNN, the March full moon is called the worm moon by Native Americans because it’s also when earthworm trails are most visible, but that’s neither here nor there.

Tiananmen Square watch dropped from auction over threats to vendor