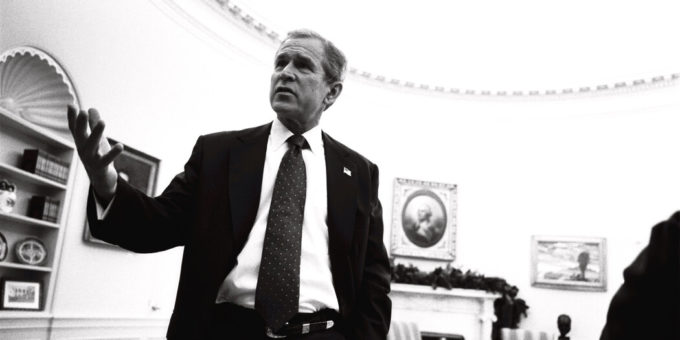 You can draw a straight line from the “war on terror” to the Jan. 6 attack on the Capitol, from the state of exception that gave us mass surveillance, indefinite detention, extraordinary rendition and “enhanced interrogation” to the insurrectionist conviction that the only way to save America is to subvert it.

Or, as the journalist Spencer Ackerman writes in “Reign of Terror: How the 9/11 Era Destabilized America and Produced Trump,” “A war that never defined its enemy became an opportunity for the so-called MAGA coalition of white Americans to merge their grievances in an atmosphere of righteous emergency.” That impulse, he continues, “unlocked a panoply of authoritarian possibilities that extended far beyond the War on Terror, from stealing children to inciting a violent mob that attempted to overturn a presidential election.”

The “war on terror” eroded the institutions of American democracy and fed our most reactionary impulses. It set the stage for a new political movement with an old idea: that some Americans belong and some don’t; that some are “real” and some are not; that the people who are entitled to rule are a narrow, exclusive group.

It is with all of this in mind that I found it galling to watch George W. Bush speak on Saturday.

The former president helped commemorate the 20th anniversary of Sept. 11 with a speech in Shanksville, Pa., at a memorial service for the victims of Flight 93. He eulogized the dead, praised the heroism of the passengers and crew, and hailed the unity of the American people in the weeks and months after the attacks. He also spoke to recent events, condemning extremists and extremism at home and abroad.

“We have seen growing evidence that the dangers to our country can come not only across borders, but from violence that gathers within,” Bush said. “There is little cultural overlap between violent extremists abroad and violent extremists at home. But in their disdain for pluralism, in their disregard for human life, in their determination to defile national symbols, they are children of the same foul spirit. And it is our continuing duty to confront them.”

From there, Bush voiced his dismay at the stark polarization and rigid partisanship of modern American politics. “A malign force seems at work in our common life that turns every disagreement into an argument, and every argument into a clash of cultures,” he said. “So much of our politics has become a naked appeal to anger, fear and resentment. That leaves us worried about our nation and our future together.”

Bush spoke as if he were just an observer, a concerned elder statesman who fears for the future of his country. But that’s nonsense. Bush was an active participant in the politics he now bemoans.

In 2002, Bush said that the Senate, then controlled by Democrats, was “not interested in the security of the American people.” In 2004, he made his opposition to same-sex marriage a centerpiece of his campaign, weaponizing anti-gay prejudice to mobilize his conservative supporters. Ahead of the 2006 midterm elections, he denounced the Democratic Party as “soft” on terrorism and unable to defend the United States.

And this is to say nothing of his allies in the conservative media, who treated disagreement over his wars and counterterrorism policies as tantamount to treason. Nor did his Republican Party hesitate to smear critics as disloyal or worse. “Some people are now attacking the president for attacking the terrorists,” stated the Republican National Committee’s first ad of the 2004 presidential election.

Bush was noteworthy for the partisanship of his White House and the ruthlessness of his political tactics, for using the politics of fear to pound his opponents into submission. For turning, as he put it on Saturday, “every disagreement into an argument, and every argument into a clash of cultures.”

Bush won some praise on Saturday. A typical response came from Michael Beschloss, a presidential historian and frequent fixture of cable news, who said it was an “important speech.”

It is frankly maddening to see anyone treat the former president as if he has the moral authority to speak on extremism, division and the crises facing our democracy. His critique of the Trump movement is not wrong, but it is fatally undermined by his own conduct in office.

In his eight years as president, George W. Bush launched two destructive wars (including one on the basis of outright lies), embraced torture, radically expanded the power of the national security state and defended all of it by dividing the public into two camps. You were either with him or you were against him.

As much as he has been rehabilitated in the eyes of many Americans — as much as his defenders might want to separate him and his administration from Donald Trump — the truth is that Bush is one of the leading architects of our present crisis. We may not be able to hold him accountable, but we certainly shouldn’t forget his starring role in making this country more damaged and dysfunctional than it ought to be.