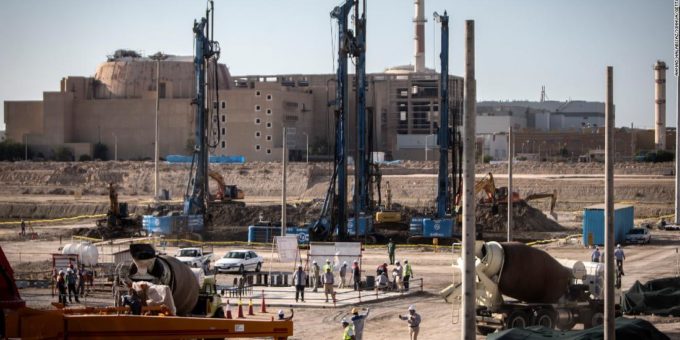 “We are reaching a point where Iran’s nuclear escalation will have eliminated the substance of the JCPOA,” the Arms Control Association said earlier this month of the Joint Comprehensive Plan of Action, the Iran nuclear agreement signed by Britain, France, Germany, Russia, China, the United States, as well as Iran, in 2015.
Three years later, President Donald Trump withdrew the US from the pact and reimposed sanctions on Iran. While the JCPOA is still recognized by the remaining signatories, Iran has since embarked on an accelerated program of enriching uranium that could allow it to create a weapon more quickly.
Every delay in the negotiations that have just resumed after a brief break in the eighth round in Vienna allows Iran time to make further progress toward the ability — if not the will — to make at least a testable nuclear weapon. And indeed there is a theoretical off-ramp barely two weeks away when the sixth month of negotiations is reached and the talks could come to a real, and toxic, end.

“Iran today is probably within a month or two of having enough material that could, with further enrichment, be sufficient to actually build a bomb,” Gary Sick, head of Columbia University’s Gulf/2000 project and the Iran expert on the National Security Council under President Jimmy Carter, told me via email interview.

“The skill and experience that they have developed in this round, however, will not be forgotten. So even if Iran returns to the original status of 2015, it will be better poised to get there quicker the next time, if there is a next time,” Sick added.

However Sick and others believe that Iran has not yet made the final determination to go that last step toward a testable nuclear device. The Grand Ayatollah Ali Khamenei, who will make such a decision, has said an atomic bomb is “haram” or forbidden in Islam. Moreover, Sick points out that Iran is at least a year or two away from producing a device that could be mounted on a missile and fired at a neighboring country or beyond.
Meanwhile the White House is playing the blame game — ever more vocally laying Iran’s accelerating progress toward a bomb on Trump’s withdrawal from the process. But in fact, the US is at risk of taking its eye off the ball, focusing intently on talks with Russia over Ukraine, without seeing how they might in some fashion be tied together.

Since the breakup of the Soviet Union, Moscow no longer shares a land border with Iran, but the last thing Russia wants is another nuclear power that close by. Bring China into the equation and this quickly becomes three-dimensional chess. While concerned about a broader conflict in the Middle East that could disrupt some of its energy supplies, China shares few of Russia’s fears of a nuclear-armed Iran.

At the same time, as one of the very few customers for Iranian oil under sanctions, China has few incentives to see sanctions lifted. The White House insists, however, that the administration has been able to engage with Russia and China within the JCPOA format and that it is still only Iran that is dragging its heels.

Still, both Secretary of State Antony Blinken and his top negotiator Wendy Sherman, the original architect of the JCPOA under President Barack Obama, have been focusing intently on the Russia-Ukraine talks and seeking European agreement to sanctions should Putin invade. Indeed, when Blinken was interviewed on NPR last week, he spent much of his time talking about Russia and Ukraine. At the end, when talk turned to Iran, Blinken devoted most of his energy to blaming Trump.

There is no question that the immediate impact of a Russian invasion of Ukraine would be most appalling, but the inexorable moves by Iran toward enrichment of uranium and the evidence that the US appears at least to have prioritized negotiations with Russia over Ukraine cannot be lost on a very savvy Iranian leadership.

Senior Biden administration officials have told me that they believe they are able to engage with Russia and China with respect to the JCPOA. The key evidence will be where the negotiations stand when they reopen following the current break.

Indeed now, virtually everyone with a stake in Iran’s nuclear capabilities is beginning to reposition itself in the event of a breakdown in the negotiations.

At a meeting of Chinese and Iranian foreign ministers last week, the countries announced a 25-year cooperation agreement aimed at strengthening economic and political ties. China has become a major customer for Iranian oil, importing some 590,000 barrels per day last year, the highest level since Trump reimposed sanctions. Lifting sanctions could threaten that exclusivity.
At the same time, Russia and Iran are also strengthening links, with President Vladimir Putin to host his counterpart President Ebrahim Raisi later this month amid plans for a 20-year trade and military agreement.
Other nations in the region have also begun hedging their bets. Israel and Russia have big stakes in Iran’s nuclear capabilities — perhaps even larger than Western Europe or the United States, which is outside the range of any Iranian missile that’s been tested so far.
Earlier this month, Israeli Prime Minister Naftali Bennett and Putin “agreed on continued close cooperation on this area,” according to the Israeli prime minister’s office. The two countries already have a “deconfliction” agreement that allows Israeli warplanes to attack Iranian bases and weapons convoys in Syria — deconfliction being an essential extension if Israel were to mount an air strike against Iranian nuclear facilities.
Elsewhere, Saudi Arabia has begun cozying up to Beijing. China is helping the Saudis with everything from a missile development program to a massive desalination network, and is already one of Saudi Arabia’s largest trading partners. It’s a relationship that could prove a fruitful source of nuclear technology should Iran develop its own weapon.
Back at the JCPOA negotiating table, Iran’s key conditions remain all but unchanged. Nournews, a news service affiliated with Iran’s Supreme National Security Council, reported last week that “verification and assurances” — code for the continued demand that all sanctions be lifted — are a precondition for Iran consenting to resume the agreement.

But there are more questions on which any successful outcome at the Iran talks may well hinge.

Will Iran settle for being a state permanently on a nuclear threshold and will that satisfy the security needs of its neighbors and potential targets?

For the moment, the US must thread this impossibly slim eye of a needle. It is difficult to see how the JCPOA process could survive an utter breakdown in East-West security talks or more particularly any incursion into Ukraine by Russian forces.

But the Biden administration must find a way to stay focused on Iran. At the next round of Vienna talks, there must be some real, concrete evidence of progress.

11 Hidden Reasons Why you Are Unable to Lose Weight