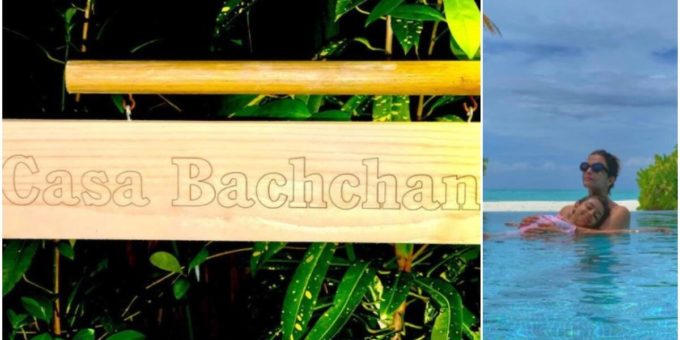 Actors Aishwarya Rai and Abhishek Bachchan shared new pictures from their Maldives vacation. The couple is at the popular tourist destination this week, presumably to celebrate their daughter Aaradhya’s 10th birthday on Tuesday. They had previously shared pictures of the spectacular view from their villa at the Amilla Fushi island.

On Monday, Aishwarya took to Instagram to post a picture of what appeared to be an excursion into the ocean, where she caught a glimpse of a pod of dolphins. She captioned the post with emojis, and also posted a picture of a board that read ‘Casa Bachchan’. Abhishek, meanwhile, shared a bunch of sunset pictures. “Sunsets filled with love,” he wrote in his caption, tagging the property. His niece Navya Naveli Nanda dropped a heart-eyes emoji in the comments section.

Aishwarya and Abhishek tied the knot in 2007. They welcomed Aaradhya in 2011. Both actors regularly share pictures with her on social media, and Aaradhya often accompanies them on work trips and vacations.

Previously, Aishwarya and Abhishek had posted pictures of their pristine surroundings. “Not a bad view to wake-up to,” Abhishek had written alongside his post, which showed the blue skies and the beach. “Sun, breeze and paradise,” Aishwarya wrote on her post.

It seems as if their trip is sponsored, going by the prominent tags that the actors made sure to include in each of their posts. You can check out more pictures of the luxurious resort that they are staying at here. Villas at the Amilla can cost around $1,000 to $19,000, which is around Rs 75,000 to Rs 14 lakh per night.