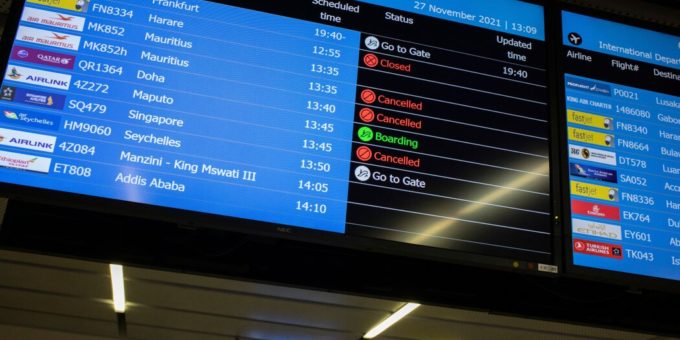 Cases of the Omicron variant of the coronavirus were reported for the first time in Australia on Sunday, adding to a growing list of countries that are scrambling to respond to a new, highly mutated version of the virus that scientists still know little about but that has sent ripples of panic through governments and markets.

Australian health officials confirmed that two travelers arriving from southern Africa over the weekend had tested positive for the new variant, which was first detected in Botswana and South Africa.

The World Health Organization warned on Friday that Omicron was a “variant of concern,” the most serious category the agency uses for such tracking, and said that its numerous genetic mutations could help it spread more quickly, even among vaccinated people.

Scientists cautioned that relatively little is known about the new variant, and that only a small number of confirmed cases have surfaced globally. Still, there are worries that Omicron could have spread more widely before scientists in South Africa discovered it last week, and the memories of the rampaging spread this year of the Delta variant have prompted fresh waves of travel restrictions, aimed primarily at southern African countries.

Britain, Italy, Belgium, the Netherlands and Israel are among the countries that have identified Omicron infections in recent days and imposed new travel restrictions. In a sign of how seriously the authorities in Europe, which is already battling a surge of coronavirus cases, are taking the new threat, officials in France on Friday also suspended arrivals from seven southern African countries even though the new variant had not yet been detected in France.

“It’s probably a question of hours, let’s be honest,” Olivier Véran, the health minister, told reporters on Sunday at a vaccination center in Paris. But he added that “new variant doesn’t necessarily mean new wave, or that the variant is more dangerous.”

“To be safe, we are acting as though this variant is potentially dangerous,” he said.

The European Union is restricting travel to and from seven countries in southern Africa — Botswana, Eswatini, Lesotho, Mozambique, Namibia, South Africa and Zimbabwe — while the United States and South Korea have targeted those countries and Malawi. Britain has restricted travel with those eight nations and Angola, Mozambique and Zambia. Israel announced the world’s strictest ban to date, sealing its borders to all foreigners for 14 days after one case was confirmed in the country.

But it was clear that the virus was crossing borders despite flight bans: 61 passengers out of more than 500 on two flights from southern African countries into the Netherlands on Saturday tested positive for the coronavirus and were quarantining in Amsterdam. The Omicron variant is likely to be found in some of those 61 passengers who tested positive, the Dutch authorities said.

Scientists were careful to note that the extent of the threat from Omicron remained unclear, and that existing vaccines were likely to protect against it. Although some variants of concern, like Delta, have lived up to initial worries, others have had a more limited impact.

Some experts, including the W.H.O., said that the rush to reintroduce travel bans and border closures was premature and would unfairly punish African countries that have already suffered from delayed and insufficient vaccine supplies caused in large part by Western countries hoarding doses.

In Australia, officials said that Omicron was detected in two travelers who flew into Sydney on Saturday evening on a Qatar Airways flight from Doha. They were asymptomatic and fully vaccinated, according to a statement from the health authority in New South Wales State. The travelers were placed into quarantine.

“Close contacts will be contacted regularly, and compliance checks will be undertaken,” the New South Wales health authority said.

Scientific experts at the World Health Organization warned on Friday that a new coronavirus variant discovered in southern Africa was a “variant of concern,” the most serious category the agency uses for such tracking.

The designation, announced after an emergency meeting of the health body, is reserved for dangerous variants that may spread quickly, cause severe disease or decrease the effectiveness of vaccines or treatments. The last coronavirus variant to receive this label was Delta, which took off this summer and now accounts for virtually all Covid cases in the United States.

The W.H.O. said the new version, named Omicron, carries a number of genetic mutations that may allow it to spread quickly, perhaps even among the vaccinated.

Independent scientists agreed that Omicron warranted urgent attention, but also pointed out that it would take more research to determine the extent of the threat. Although some variants of concern, like Delta, have lived up to initial worries, others have had a limited impact.

William Hanage, an epidemiologist at the Harvard T.H. Chan School of Public Health and other researchers said that vaccines will most likely protect against Omicron, but further studies are needed to determine how much of the shots’ effectiveness may be reduced.

As the coronavirus replicates inside people, new mutations constantly arise. Most provide the virus with no new advantage. When worrisome mutations do emerge, the World Health Organization uses Greek letters to name the variants. The first “variant of concern,” Alpha, appeared in Britain in late 2020, soon followed by Beta in South Africa.

Omicron first came to light in Botswana, where researchers at the Botswana Harvard H.I.V. Reference Laboratory in Gaborone sequenced the genes of coronaviruses from positive test samples. They found some samples sharing about 50 mutations not found in such a combination before. So far, six people have tested positive for Omicron in Botswana, according to an international database of variants.

Around the same time, researchers in South Africa stumbled across Omicron in a cluster of cases in the province of Gauteng. As of Friday, they have listed 58 Omicron samples on the variant database. But at a news conference on Thursday, Tulio de Oliveira, the director of the Centre for Epidemic Response & Innovation in South Africa, said that “close to two or three hundred” genetic sequences of Omicron cases would be released in the next few days.

When the World Health Organization began to name the emerging variants of the coronavirus, officials turned to the Greek alphabet to make it easier for the public to understand the evolution: Alpha, Beta, Gamma, Delta and so on.

Now the alphabet has created its own political headache. When it came time to name the potentially dangerous new variant that has emerged in southern Africa, the next letter in alphabetical order was Nu, which officials thought would be too easily confused with “new.”

The letter after that was even more complicated: Xi, a name that in its transliteration, though not its pronunciation, happens to belong to the leader of China, Xi Jinping. So they skipped both and named the new variant Omicron.

“‘Nu’ is too easily confounded with ‘new,’ and ‘Xi’ was not used because it is a common last name,” a spokesman, Tarik Jasarevic, said on Saturday in an emailed response to questions about skipping the two letters.

The organization’s policy, he went on, requires “avoiding causing offense to any cultural, social, national, regional, professional, or ethnic groups.”

The organization did not initially explain why it jumped from Mu, a lesser variant first documented in Colombia, to Omicron. The omission resulted in speculation over the reasons. For some, it rekindled criticism that the organization has been far too deferential in its dealings with the Chinese government.

“If the WHO is this scared of the Chinese Communist Party, how can they be trusted to call them out the next time they’re trying to cover up a catastrophic global pandemic?” Senator Ted Cruz, the Republican from Texas, wrote on Twitter.

There is no evidence that the Chinese had any say in naming the new variant, known scientifically as the SARS-CoV-2 variant B.1.1.529. Some variants have proved less transmissible, but Omicron could be the most worrisome new version since the Delta.

Throughout the pandemic, the W.H.O. has sought to avoid the once common practice of referring to health threats with geographic terms: Spanish flu, West Nile virus, Middle East Respiratory Syndrome, Zika and Ebola.

That reflected concerns among scientists about the risk of stigmatizing places or peoples, but it was also seen in the early months of the pandemic as deferential to China, which has an influential role in global health affairs.

Chinese officials have reacted angrily to efforts to associate the pandemic with the country or Wuhan, the central city where it first spread in the fall of 2019. China’s fiercest critics in the United States, including then President Donald J. Trump and his aides, persisted anyway, at times using sophomoric and racist slurs.

“The novel coronavirus affects everyone and needs to be tackled with joint efforts, instead of fear-mongering in a xenophobic way,” Geng Shuang, a spokesman for China’s Ministry of Foreign Affairs, said at the time.

The pharmaceutical company Merck said on Friday that in a final analysis of a clinical trial, its antiviral pill reduced the risk of hospitalization and death among high-risk Covid patients by 30 percent, down from an earlier estimate of 50 percent.

The lower efficacy is a disappointment for the drug, known as molnupiravir, which health officials around the world are counting on as a critical tool to save lives and reduce the burden on hospitals. It increases the importance of a similar, apparently more effective, offering from Pfizer that is also under review by the Food and Drug Administration.

A panel of advisers to the F.D.A. is set to meet on Tuesday to discuss Merck’s treatment and vote on whether to recommend authorizing it to treat high-risk Covid patients.

In briefing documents posted to the F.D.A.’s website on Friday, agency reviewers did not take a position on whether the drug should be authorized, though they found that the clinical trial data did not show any major safety concerns and that the drug was effective in preventing severe disease.

The reviewers said they had only become aware of the updated efficacy estimate earlier this week and were still reviewing the data. They said they could update their assessment when the panel meets on Tuesday.

Dr. David Boulware, an infectious disease researcher at the University of Minnesota, said he expected the drug would still receive emergency authorization. If the expert committee endorses it and the F.D.A. heeds the recommendation, the treatment could be authorized in the United States as soon as next week.

“The reduction in hospitalization is a little bit less, but there is still a big mortality benefit if you start early,” he said.

Still, he said, molnupiravir will probably be deemed a lower-tier treatment, an alternative choice for people who can’t get or don’t want more effective treatments.

Monoclonal antibody drugs, which are typically administered intravenously in the United States, have been found to reduce hospitalizations and deaths by at least 70 percent. Pfizer’s antiviral pill, Paxlovid, which was found in a clinical trial to cut the risk of hospitalization and death by 89 percent, could become available within weeks. Fluvoxamine, a common and inexpensive antidepressant, appears to be about as effective as molnupiravir.

Meant to be dispensed at pharmacies and taken at home, Merck’s drug is the first in a new class of antiviral treatments for Covid that are expected to reach many more people than other treatments have. Public health experts say that while the pills are no substitute for vaccination, they have the potential to prevent severe illness and save lives.

UAE orders release of 870 prisoners ahead of National Day