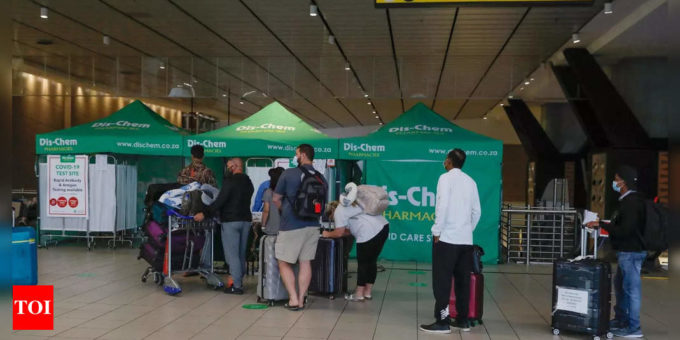 Two people who tested positive for the coronavirus in the Netherlands more than a week ago were infected with the Omicron variant, Dutch health officials reported on Tuesday. The timing is significant because it suggests that the variant was already present in the country for at least a week before the arrival of two flights from South Africa on Friday, and before the WHO labelled Omicron a “variant of concern,” the step that prompted countries around the world to ban flights from southern Africa, where researchers first identified the variant. “We have found the Omicron variant in two test samples that were taken on November 19 and November 23,” the Dutch health ministry said in a statement on Tuesday. “It is not yet clear whether these people had also visited southern Africa.” The two samples were taken by municipal health services at public testing sites, and health authorities have started contact tracing in those areas, Dutch health officials said.
Although little is known yet about how transmissible Omicron is, or whether it can evade existing vaccines, its detection in Botswana and South Africa has created the most uncertain moment of the pandemic since the Delta variant emerged in the spring.
The announcement from the Netherlands also highlighted that scientists still cannot say with certainty where or when the variant originated. So far, the first known sample of the Omicron variant was collected on November 9 in South Africa, according to Gisaid, an international database for disease variants. Officials across Europe fear that Omicron will add pressure on countries that are already in the grip of some of the worst coronavirus surges they have seen.
The European Center for Disease Prevention and Control said on Tuesday that so far, 42 cases of the new variant have been confirmed in 10 European countries. Andrea Ammon, the agency’s director, said that all the confirmed cases in Europe have exhibited mild symptoms or none at all, and that authorities were analysing six further “probable” cases. She said health officials were conducting additional tests on people who have recovered from illness brought on by Omicron to help assess how the variant behaves in vaccinated people. Countries across the EU have scrambled to reinforce travel curbs in the hope of curbing the spread of the variant, as WHO warned that the risk it posed was“very high.”
Japan confirmed on Tuesday its first case of the Omicron variant, a Namibian diplomat who recently arrived from his country, officials said. Chief cabinet secretary said the patient, aman in his 30s, tested positive upon arrival at Narita airport on Sunday and was isolated and is being treated at a hospital. Israel said the new variant has been detected in two Israeli doctors, one of whom had returned from a conference in London in the past week, a spokesperson for Sheba Medical Center near Tel Aviv confirmed on Tuesday. The two had received three doses of the Pfizer/BioNtech jab, and so far have shown mild symptoms, the hospital said. The physician who had returned from UK had probably infected his colleague, it said.

Humaima Malick is Having Serene Time in Turkey