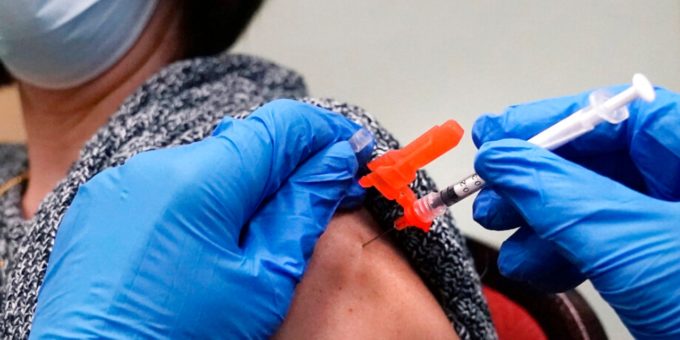 As the omicron variant of the coronavirus continues to spread, officials in several states across the country have reported the surge is showing signs of slowing.

“We are continuing to turn the corner against the winter surge thanks to New Yorkers getting vaccinated, boosted and masking up,” Gov. Kathy Hochul said in a statement. “But we can’t let our guard down and undo all of the progress we’ve made. Please keep wearing your masks and make sure you get your vaccination or booster as soon as possible.”

Last week, doctors at Connecticut’s two largest health care systems said they believe the latest wave of the COVID-19 pandemic may be peaking there.

Dr. Thomas Balcezak, the chief medical officer at Yale-New Haven Health, said then that he believed the state would begin to see an “ease-up” of the total number of hospitalizations in coming days – but that it “will be a slow decline over the next four to six weeks.”

However, hospitalizations were down and 67.9% of the patients currently hospitalized with COVID-19 were not fully vaccinated.

The Washington Post also previously reported that experts in Washington, D.C., Maryland and Virginia said COVID-19 may be peaking there.

Massachusetts Gov. Charlie Baker said Tuesday that the state appears to be on the “back side” of omicron.

He told reporters during a news conference that Massachusetts is seeing COVID-19 levels in wastewater heading on “exactly the same trajectory” that other parts of the U.S., the U.K. and South Africa have.

“Straight up and then straight down,” Baker said. “The one thing I would say of COVID is generally you just never know, but it certainly does look like we are very much on the backside of the omicron surge in Massachusetts.”

In the Midwest, Illinois and Chicago officials reported that omicron appeared to be slowing, with record numbers of hospitalizations declining.

Gov. J.B. Pritzker told reporters at a briefing that since hitting a statewide all-time high of hospital patients on Jan. 13, that count has dropped nearly 12%. Hospitalizations in Chicago have not dropped but have started to plateau.

“We are a long way from being out of the woods,” Chicago Public Health Commissioner Dr. Allison Arwady said at a separate news conference. “The threat is in no way over, but the news is good in terms of the direction that it’s turning.”

However, while more Americans are getting “up to date” with their COVID-19 vaccines, other states in the South and West are seeing cases spike.

New Mexico became the first state in the nation to ask that National Guard troops serve as substitute teachers as preschools and K-12 public schools struggle to keep classrooms open and virus hospitalizations have surged in Oklahoma, where patients have been treated in hallways and closets.

“Make no mistake, omicron is causing hospitalizations and deaths and even the less severe cases are inundating health facilities,” World Health Organization (WHO) Director-General Tedro Adhanom Ghebreyesus said during a Tuesday briefing. “The virus is circulating far too intensely with many still vulnerable.”

In the past week, the U.S. has seen more than 5.2 million new cases and 12,376 new deaths, according to data from Johns Hopkins University.

Ankylosaurs dug into the ground to protect themselves, U of A paleontologist says
2021-03-20