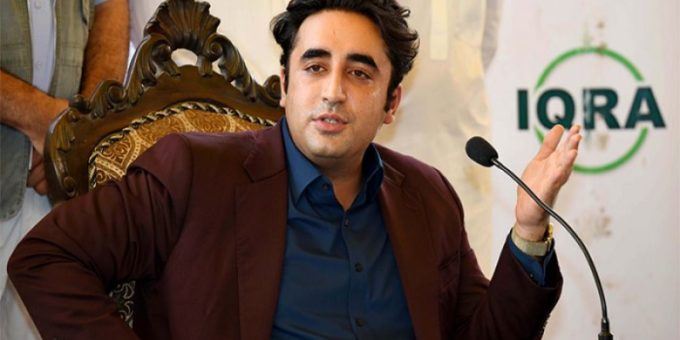 PPP Chairman Bilawal Bhutto-Zardari said on Wednesday that the PPP was not answerable to PML-N Vice President Maryam Nawaz or PML-N supremo Nawaz Sharif and that his stance remained unchanged.

Addressing a press conference in Badin, Bilawal was responding to a question from a reporter on Maryam’s recent comments that the PPP had not responded to the show cause notice sent to it and had shown her support to comments by Pakistan Democratic Movement (PDM) Secretary General Shahid Khaqan Abbasi.

Abbasi had said on Tuesday that there was no place for the PPP within the opposition alliance until it restored the trust it had betrayed. He said that the PDM had sought a response from the PPP, which Bilawal had torn into pieces. “We had asked for a response. Join together the torn pieces [of the show-cause notice], read it and give us the clarification we had sought,” Abbasi had said.

In Wednesday’s press conference, the PPP chairman acknowledged that he had torn the show cause notice and there was no change in his stance on the PDM. “We are not answerable to Maryam or Mian Sahab. We are answerable to the PPP and the PPP’s workers and we think the real joy will be in doing politics together with the PPP’s workers.”

Bilawal said that Shehbaz Sharif was the leader of the opposition in the National Assembly and the PML-N president, thus the PPP would consider his stance and statements to be official PML-N policy and conduct its politics according to that.

He added that the PPP respected Jamiat Ulema-i-Islam (JUI-F) chief Maulana Fazlur Reh­man and the two parties had had a “good relationship and contact”. Bilawal said, however, that the PPP was engaging in politics based on its vision, principles, with respect and “we dont change our stance.”

He called on those who wanted democracy to flourish, civilian supremacy and actually wanted to oppose Prime Minister Imran Khan to “instead of opposing the PPP, our friends in the opposition should target the government.”

Bill for protection of journalists

During Wednesday’s press conference, Bilawal also said he was grateful to the Sindh government, law department and the journalist community for the bill for the protection of journalists being approved by the committee in the Sindh Assembly.

“This will hopefully become law after being passed by the Sindh Assembly. It is with great sadness that we have to pass such bills in the 21st century, when you should get all protection according to the Constitution.”

He condemned the swiftness with which journalists were being targeted and subjected to injustice and said Sindh Information Minister Nasir Shah was constantly engaged in efforts to follow-up and punish anyone involved in injustice with journalists.

Bilawal also condemned the attack on journalist and Youtuber, Asad Ali Toor, in Islamabad on Tuesday night. He questioned what kind of message was sent to all of Pakistan if journalists didn’t feel secure under the federal government.

He particularly hit out at Interior Minister Sheikh Rashid for “lecturing other provinces but not being able to provide security to one journalist in Islamabad, his own domain”. Bilawal said it was a “matter of shame” how journalists were allegedly attacked and beaten in their own homes every month in Islamabad and demanded action and an inquiry to be conducted at the highest levels.

The PPP chairman also once again reiterated the demand for release of funds and compensation according to the Supreme Court order to Bahria Town Karachi so it could be spent on infrastructure and development.

Bilawal also talked at length about issues and problems related to water and said there was a need to create a new consensus on distribution of water based on equality and justice. He said the PPP was ready to fight on the issue of injustice in water distribution on every level and also outlined measures by the Sindh Government to combat the issue such as lining of canals.

5 Ways to Clear Congested Skin and Get Smooth Texture

Allow Women To Travel By Mumbai Locals: Maharashtra To Railways
2020-10-17