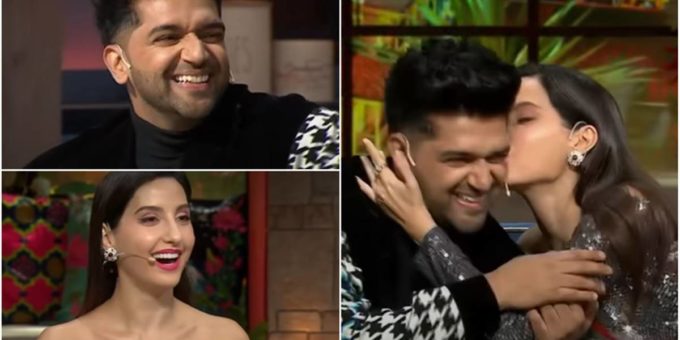 Nora Fatehi and Guru Randhawa will feature on The Kapil Sharma Show’s latest episode to promote their song ‘Dance Meri Rani.’ This comes amid rumours that suggest Nora and Guru are dating each other. In December, their photos from Goa had gone viral on the social media platforms. While the duo put the speculations at rest, Kapil Sharma, the host of the talk show, didn’t let go of the opportunity to poke around further. In a promo, which was shared on Sony Television’s Instagram account, Kapil quizzes Guru about what’s cooking between him and Nora.

Kapil points out that Guru made Nora a robot in the ‘Naach Meri Rani’ video, while in ‘Dance Meri Rani,’ she is seen as a mermaid. He asks him what the singer really imagines Nora to be in his heart. Later, Kapil questions Nora if she has seen any improvement in Guru’s dancing skills. Answering Kapil, Nora says he has only started dancing because of her, otherwise he would keep doing the same move in his videos. A hurt Guru says he found Nora’s comment “mean.” In response, Nora gives Guru a kiss on the cheek as an apology.

Kapil also shows Guru an album that had photos of several actors. He says, “The point is, when there are so many actors, why do you always pick Nora?” The question left the guests in splits. When Nora says that she felt bad that the album didn’t have her picture, Kapil said she lives in his heart. A sad Nora calls Kapil ‘paaji’ (brother), which left Kapil all sad-faced.

The video also received love from Nora and Guru’s fans. “Love their chemistry so much,” a fan wrote, while another comment read, “They both are so cute.”