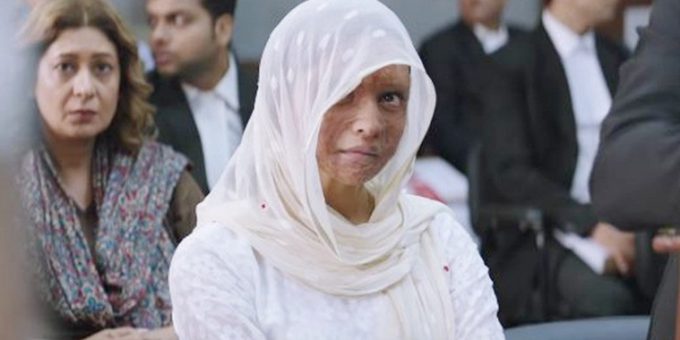 
Deepika Padukone in a still from Chhapaak.

Copyright cannot be claimed on true events and incidents, Chhapaak movie director Meghna Gulzar told the Bombay High Court on Tuesday and sought the dismissal of a suit filed by a writer claiming he originally penned a story on the life of an acid attack survivor on which the film is based.

Gulzar filed an affidavit in response to the suit filed by writer Rakesh Bharti, who sought credit as one of the writers of the film.

The suit fails to make out any case of copyright infringement, the affidavit said, adding information available in public domain is not protected under Copyright Act.

“In the present case, the plaintiff (Bharti) has sought protection of an idea of a film based on the story of an acid attack survivor Laxmi Agarwal,” Gulzar said in the affidavit.

True facts and events are not entitled to copyright protection, the affidavit added. The director further said the suit has been filed with ulterior motives to gain undue publicity and to obstruct the release of the movie Chhapaak.

“The plaintiff’s intention is to only wrongfully and dishonestly gain publicity and pressurize Meghna Gulzar. The plaintiff wants to tarnish the reputation of Meghna Gulzar and extract money,” the affidavit said.

The suit came up for hearing before Justice S C Gupte who posted it for hearing on Wednesday. Bharti sought an interim stay on the release of the movie pending final hearing of the suit.

The Deepika Padukone starrer is slated for release on January 10 and is based on the life of acid attack survivor Laxmi Agarwal.

The suit filed by Bharti claimed he had conceived an idea/script for a movie, tentatively titled ‘Black Day’, and got it registered with the Indian Motion Pictures Producers’ Association (IMPPA) in February 2015.

Bharti said since then he has been working on the script and approaching several artists and producers, including Fox Star Studio, for narration.

“However, the project could not commence due to unavoidable circumstances. The plaintiff had narrated the idea to Fox Star Studio, which is the production house for ‘Chhapaak’,” the plea said.

Iran attacks US air base in Iraq