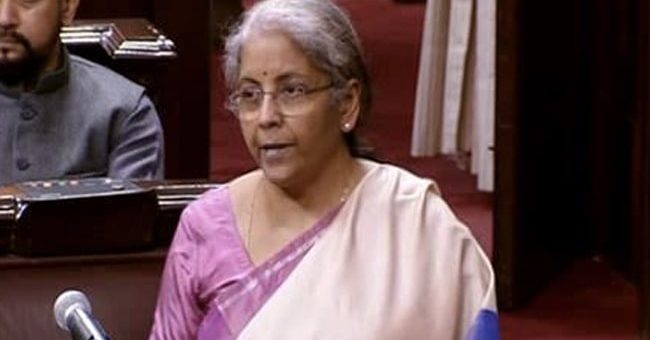 Nirmala Sitharaman listed a host of government schemes and measures meant for the poor.

Finance Minister Nirmala Sitharaman today hit back at the opposition, especially the Congress, for attempting to paint the Narendra Modi government as one catering only to crony capitalists. Listing out the provisions in Budget 2021 and other policey measures aimed at India’s poor, she even took a swipe at the BJP’s main rival by playing on the oft-used son-in-law theme to embarrass it.

“It has now become a sort of habit for some in the opposition to constantly allege, in spite of what we are doing for the poor and the steps taken for helping the poor and needy of this country…a false narrative is created to accuse that this government works only for cronies,” Ms Sitharaman said responding to the debate on this year’s budget.

She said 800 million people had been provided free food grain, 80 million had been given free cooking gas, and cash was directly transferred to the accounts of some 400 million people, farmers, women, divyang (differently abled), and the poor.

She then asked the opposition if only cronies benefited from these provisions.

“Over 1.67 crore houses were completed under the PM Awas Yojana. Is it for the rich? Over 2.67 crore households were electrified under PM Saubhagya Yojana since 2017 October. The total value of orders placed on government e-market is Rs 8,22,077 crore. Are they being given to big companies? They’re being given to MSMEs,” she said.

The Finance Minister had more to say as she cited the over 3.6 lakh crore digital transactions made via the Unified Payments Interface between Augusts 2016 till January 2020.

“UPI is used by who? The rich? No. Middle class, smaller traders. Who are these people then? Is Govt creating UPI, facilitating digital transactions to benefit rich cronies? Some damaads? No,” she said.
He multiple utterance of the term “damaad” evoked sharp responses from the opposition benches, especially the Congress. She promptly said, “Does the Congress party have a trademark over the word ‘damaad’?”

Her emphasis on disproving the cronyism slur stemmed from frequent allegations by the opposition leaders. For instance, only yesterday, the Congress’s Rahul Gandhi, in a fiery speech in Parliament, referred to the Narendra Modi government as a “Hum do, hamaare do” regime, implying that only a couple of people benefitted from it.

Earlier, too, Mr Gandhi has used terms like “suit-boot ki sarkar” (a government that caters to those in suits-and-boots) to put the administration on the backfoot.

Freeze bank accounts of 64 people, including PK Halder, for one more month: BFIU

Davangere Benne Dose: The Paper Thin Dosa From The Heart Of Karnataka
2022-01-27