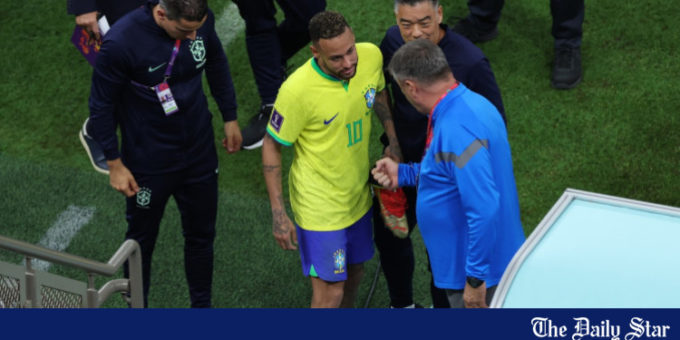 Brazil’s number 10 Neymar walks with a swollen ankle at the end of the Qatar 2022 World Cup Group G football match between Brazil and Serbia. Photo: AFP

Brazil’s number 10 Neymar walks with a swollen ankle at the end of the Qatar 2022 World Cup Group G football match between Brazil and Serbia. Photo: AFP

Brazil captain Neymar suffered a sprained ankle in his team’s World Cup win over Serbia on Thursday and faces a medical assessment in the next 48 hours, the national team doctor said after the match.

Doctor Rodrigo Lasmar said the Brazilian superstar suffered the injury after a collision with his opponent.

Neymar was substituted in the 79th minute of Brazil’s 2-0 win over Serbia.

“We need to wait 24 to 48 hours to have a better assessment,” Lasmar said. “We have not scheduled any MRI and tomorrow we’ll have a new assessment.

“We need to wait, we cannot make any premature comments about his evolution.”

Neymar was seen limping heavily after the game while photos of the striker showed swelling on his right ankle.

Coach Tite said the Paris Saint-Germain player initially stayed on the field after hurting his ankle “because the team needed him”.

He also moved to play down fears that the 30-year-old could face a lay-off long enough to end his World Cup campaign.

“You can be certain that Neymar is going to play in the World Cup,” he said.

A downcast-looking Neymar declined to speak to journalists as he left the stadium on Thursday.

His first World Cup in 2014 ended in agony as he suffered a fractured bone in his back in Brazil’s quarter-final win over Colombia.

Without him, the hosts suffered a humiliating 7-1 defeat against Germany in the semi-finals.

Four years later Neymar had to race to recover from injury in time to be fit for the tournament in Russia, but Brazil never hit the heights expected of them as they lost to Belgium in the last eight.

The Brazilian talisman also missed the 2019 Copa America after suffering torn ligaments in his right ankle.

In 2021 Neymar missed roughly 10 weeks of the French season after suffering ligament damage to his left ankle following an injury in PSG’s victory over Saint Etienne.