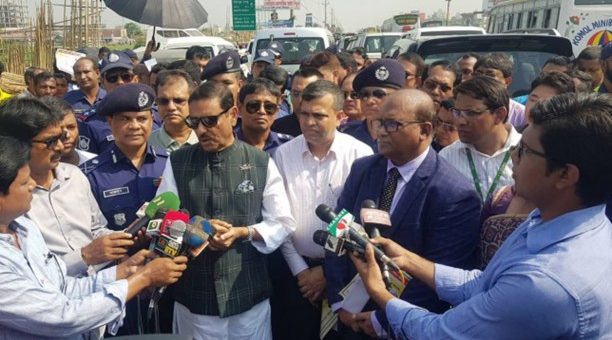 The road transport and bridges ministry has once again delayed the implementation of the Road Transport-Act 2018, after the authorities already failed to take necessary measures to start enforcing it on November 1 as was announced earlier.

Road Transport and Bridges Minister Obaidul Quader yesterday extended the time by one more week for the implementation of the law.

On November 2, Quader said that no case would be filed under the new law for the next seven days, when public awareness programmes would be conducted in this regard.

“At first, I had given seven days…I am now extending it for one more week,” Quader said yesterday.

“The work for formulating rules [of the act] is now at the final stage and has to be completed within this time,” he said.

“Mass campaigns [about the law] have to be carried out. If we execute the law without raising awareness and taking precaution, it may have a boomerang effect,” he added.

Quader, also the general secretary of ruling Awami League, was talking to journalists at a view-exchange meeting with officials of the Bangladesh Road Transport Authority (BRTA) over implementing the law.

Jyotirmoy Barua, a Supreme Court lawyer, however, said that as a minister, Quader does not have the jurisdiction to halt enforcement of the act. The parliament has that authority, he said.

The authority did not raise awareness in the last one year and now the implementation is being halted in the name of raising awareness — the minister cannot do that, said Jyotirmoy, also a vice-chairman of the Road Safety Foundation.

The authority was supposed to frame rules within six months of the enactment of a law, he said, adding, however, the absence of rules cannot be an excuse (to delay implementation), as many laws are in force without rules.

Amid student demonstrations for road safety last year, the parliament passed the act in September, replacing the Motor Vehicle Ordinance, 1983, with an aim to bring discipline in the transport sector.

On October 22, the Road Transport and Highways Division issued a gazette stating that the law would come into effect from November 1. But the authority is yet to complete framing the necessary rules.

Mobile courts, run by BRTA and district administration, could not step in as the law was not incorporated in the schedule of the Mobile Court Act, 2009, said BRTA officials.

BRTA Chairman Kamrul Ahsan said the new law has already been sent to the home ministry to be incorporated in the schedule of the Mobile Court Act.

Besides, law enforcers could not impose any on-the-spot fines, as their point of sale (PoS) machines, providing instant challan, were not updated with the new law. Other relevant documents were also unavailable.

Asked why his ministry could not take necessary preparations in the last 13 months, Quader indirectly blamed his ill health and the protest of transport workers against the law.

He said a three-minister committee was formed and it held several meetings with transport leaders, after which they changed their stance over the law.

“Better late than never. We are now going to implement it and hope the situation will improve,” he said.

Erdogan vows to ‘crush the heads’ of Kurds if they don’t withdraw; both sides trade blame for violating cease-fire
2019-10-19