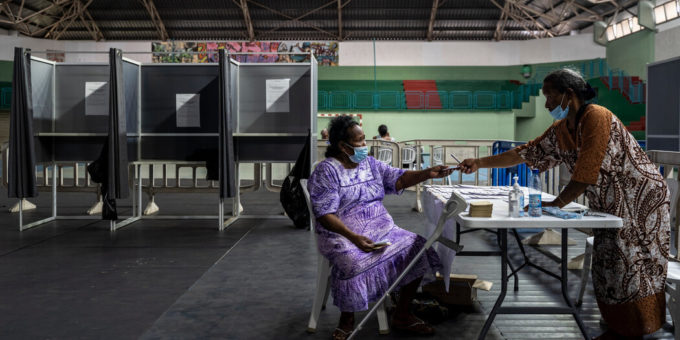 NOUMÉA, New Caledonia — New Caledonia, a tiny scattering of islands in the South Pacific, will not mark the new year by becoming the world’s newest country.

In a referendum held on Sunday, voters rejected independence overwhelmingly, with 97 percent electing to stay part of France, according to final results released on Monday by the French High Commission in New Caledonia.

But while the referendum failed, prompting those who voted “non” to fly the French tricolor in the capital, Nouméa, the result does not signal an end to dreams of New Caledonian sovereignty.

“We are pursuing our path of emancipation,” Louis Mapou, New Caledonia’s president, said in an interview, brushing aside any results of the referendum. “That is what is essential.”

Mr. Mapou is the first pro-independence leader to hold the official title of president in New Caledonia and the first from the Indigenous Kanak community, which makes up about 40 percent of the population. He refers to the territory as a country. (He is also the kind of president who chauffeurs himself in a Subaru Forester.)

Most of the Kanak pro-independence bloc boycotted Sunday’s vote after its plea for a postponement was rebuffed, with nonparticipation exceeding 95 percent in one province. The large number of people who stayed away has heightened worries that the referendum’s legitimacy was undermined by nonparticipation. President Emmanuel Macron of France, who has made shoring up the country’s international profile a cornerstone of his campaign for re-election in April, refused a delay.

“France is more beautiful because New Caledonia chose to stay,” Mr. Macron said in a televised statement on Sunday.

With its far-flung island outposts — such as French Polynesia and Wallis and Futuna in the Pacific Ocean, as well as Mayotte and Réunion in the Indian Ocean — France boasts one of the world’s largest maritime profiles. But the recent collapse of a French submarine deal with Australia, a result of the United States and Britain swooping in instead, embarrassed Paris. Mr. Macron had positioned France as a bulwark against China, which is expanding its clout in the Indo-Pacific.

“Woe to the small, woe to the isolated, woe to those who will be influenced and attacked by hegemonic powers who will come to seek their fish, their technology, their economic resources,” he said in a speech in July in French Polynesia.

Although the “hegemonic power” remained unnamed, the meaning was clear: China.

Sunday’s vote was the third of three independence referendums promised by Paris after years of conflict in New Caledonia in the 1980s, an uprising known simply as “the Events.” In the second vote last year, 47 percent chose independence, up from 43 percent in the first referendum in 2018.

The vote on Sunday drew only 44 percent of eligible voters, compared to 86 percent during the 2020 referendum. While lines of voters snaked out of polling stations in French loyalist areas of Nouméa and its environs on Sunday morning, they were virtually empty in pro-independence strongholds.

Kanak leaders had urged the French government to reschedule Sunday’s referendum for next year because a late-breaking coronavirus wave had disproportionately affected their people. Lengthy Kanak mourning traditions, they argued, made political campaigning impossible.

“The French state is disrespecting the relationship between the Kanak living and dead,” said Daniel Goa, the head of a pro-independence political party. “The decolonization process is going ahead without respecting the people who must be decolonized.”

The history of empire is one of centuries of subjugation, but there are few places left in the world where colonization endures. After annexing New Caledonia in 1853 and establishing a penal colony, the French forced the Kanaks off their fertile tribal lands and onto reservations. The French brutally crushed Kanak efforts to repel them.

With the discovery of nickel, the French administration brought in laborers from Asia and other parts of the Pacific to work the mines, which remain the territory’s biggest economic driver. Conflict and foreign diseases exacted a deadly toll on the Kanaks, whose population plunged by about half within three-quarters of a century. Today, with an influx of French crowding Nouméa — civil servants can earn salaries double that of back in France — the Kanaks are a minority in their homeland.

To prepare for the referendum on Sunday, thousands of French security forces descended on the territory of 270,000 people. The aftermath of the last referendum devolved into violence, with Kanak youths setting fire to nickel mine facilities and blockading major thoroughfares.

“Half the country is for independence and half is against it,” Charles Wea, a presidential adviser, said before the votes were counted. “We have to rebuild a new social contract. Otherwise, we will always be divided.”

New Caledonia is the only place in Melanesia, an arc of islands that stretches from Papua New Guinea to Fiji, that remains under colonial control. Neighboring Vanuatu gained independence in 1980, the Solomon Islands two years before that.

French loyalists argue that New Caledonia’s privileged economic position — its per capita G.D.P. would rank it among the top 20 richest countries if it were considered a country — is afforded by its status as a French territory. Subsidies from Paris fill New Caledonia’s coffers, and the territory’s wealth doubled over the past three decades.

Should New Caledonia eventually become independent, the territory would trade France’s geopolitical influence for that of China, which has extended its reach over Melanesia, French loyalists say. Last month, fatal riots shook the Solomon Islands, with the prime minister blaming the violence on the switch of diplomatic allegiance to China from Taiwan, the self-governing democracy that is Beijing’s political rival.

“When you look at France and China, it is totally different when it comes to human rights,” said Christopher Gygès, an anti-independence politician who also serves as New Caledonia’s minister for the economy, foreign trade and energy. “France’s presence will protect us from China’s appetite and efforts to take control of the region.”

Mr. Mapou, the president, has held open the possibility that an independent New Caledonia would entrust its defense to France, allowing Paris to maintain a regional stronghold.

“We can balance,” he said. “We can be in the Pacific, defend our interests, and maintain a link with France and Europe because of history and culture.”

Drawn by New Caledonia’s climate and comfortable living, the population of Métros, as recent arrivals from France are known, has increased sharply in a generation. The center of Nouméa is largely a white town of baguettes and leisurely games of pétanque. New Caledonia’s wealth is concentrated in the Southern Province, where Nouméa is. Even the New Caledonian government gets its office space from the province, which is governed by a white leader.

Despite New Caledonia’s prosperity, income disparities yawn wide. Kanaks make up the vast majority of the territory’s impoverished, unemployed and imprisoned. Despite government efforts to help Kanaks pursue higher education in France, there are few Kanak doctors, lawyers and engineers.

In a sprawl of dilapidated subsidized housing in Magenta, a neighborhood in Nouméa, Jeremy Hnalep, 25, said he drew little hope from politics. The buildings’ lobbies reeked of urine; clumps of young people passed around cannabis, which is illegal in New Caledonia.

“The only choice is to live outside the system because the system will not change even if there is independence,” Mr. Hnalep said.

In villages outside Nouméa, the colorful flag of Kanaky, as Kanaks call the land, flutters from market stalls and fishing boats. It flies over funerals and weddings, Catholic feast days and labor strikes. The French flag is rarely seen.

Yet on the eve of the vote, even as she acknowledged the colonial burden on the Kanaks, Anne-Marie Kourévi, the 81-year-old wife of a Kanak tribal chief in southern New Caledonia, said she would vote “oui.”

South Korea: End to Korean War agreed to 'in principle'

Assam’s Sarbananda Sonowal Votes, Says Prayed For Peace For All
2021-03-27

Kanwar Pilgrim Electrocuted, Another Killed In Road Accident In Delhi
2019-07-27

California’s Coronavirus Shutdowns Set the Tone. What’s Its Next Step?
2020-04-14