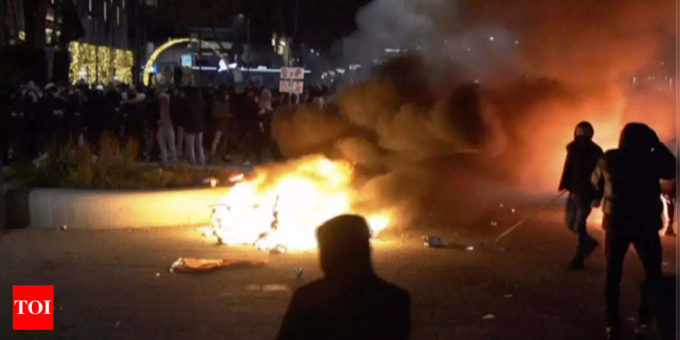 THE HAGUE: Fresh rioting broke out late Saturday over the Dutch government’s coronavirus measures, with rioters pelting police with stones and fireworks as protests turned violent for a second night in the Netherlands.
Officers in riot gear charged groups of demonstrators in The Hague, while a water cannon was used to put out a pile of blazing bicycles at a busy intersection. Five police officers were injured and at least seven people arrested.
Riots also erupted in the central “Bible Belt” town of Urk and cities in southern Limburg province, while angry fans disrupted two football matches being played behind closed doors because of coronavirus rules, Dutch media said.
The previous night an “orgy of violence” broke out in the port city of Rotterdam, during which three people were wounded when police opened fire and 51 suspects were arrested.
The Netherlands went back into Western Europe’s first partial lockdown of the winter last Saturday with at least three weeks of curbs, and is now planning to ban unvaccinated people from entering some venues, the so-called 2G option.
Peaceful protests involving thousands of people opposed to plans to limit unvaccinated people from access to certain venues took place in cities in the Netherlands earlier on Saturday, but the atmosphere changed late on Saturday.
“These people out here are protesting about 2G and the lockdown,” Hague pizza shop owner Ferdi Yilmaz told AFP. “They are angry about it.”
Yilmaz said police had dragged several people out of his shop, smashed the glass in its front door and hit him on the hand “for no reason.”
Police arrested several people in the working class Schilderswijk neighbourhood of The Hague, with plainclothes officers at one point dragging a woman out of a car, AFP correspondents saw.
Five police officers were injured, with one taken to hospital suffering concussion and two suffering hearing damage from loud fireworks, The Hague police said in a statement.
A rock thrown by rioters smashed the window of a passing ambulance carrying a patient, they said.
Separately supporters broke into two first division football matches in the western city of Alkmaar and the eastern city of Almelo, between AZ-NEC and Heracles-Fortuna Sittard, which are being played without fans because of Covid restrictions.
The games were stopped for several minutes, Dutch media said.
Earlier several thousand protesters against the latest measures gathered in Amsterdam on Saturday, despite one group earlier in the day having cancelled their rally because of the previous night’s violence.
Another thousand marched through the southern city of Breda near the Belgian border, carrying banners with slogans such as “No Lockdown”.
Organisers said they opposed Prime Minister Mark Rutte’s plans to exclude the unvaccinated from bars and restaurants.
“People want to live, that’s why we’re here,” said organiser Joost Eras.
But “we’re not rioters. We come in peace,” he said.
Around him the mood was festive, with some protesters dancing behind floats carrying DJs, dubbed “party buses”.
The latest demonstrations followed the Rotterdam unrest in which police said they had fired both warning and targeted shots and used water cannon.
“Three rioters were injured when they were hit by a bullet. They are still in the hospital,” the police said, adding that the Dutch national criminal investigation department would probe “whether the injuries were caused by police bullets”.
Seven people were wounded in all in Rotterdam including policemen.
Half of those arrested were underage and the rioters came from different parts of the country, said the police, who were still searching for more suspects.
Police had said earlier they had fired several warning shots but that “at one point the situation became so dangerous that officers felt compelled to shoot at targets”.
Rotterdam’s mayor Ahmed Aboutaleb denounced what he called an “orgy of violence”, adding: “The police felt the need to draw a police weapon in the end to defend themselves.”
The Dutch government also condemned the violence in Rotterdam as “horrifying”.

China: Man banned from all-you-can-eat BBQ for eating too much

Coronavirus vaccination: Here’s why you are asked to not rub or massage the injection site after vaccination
2021-09-04