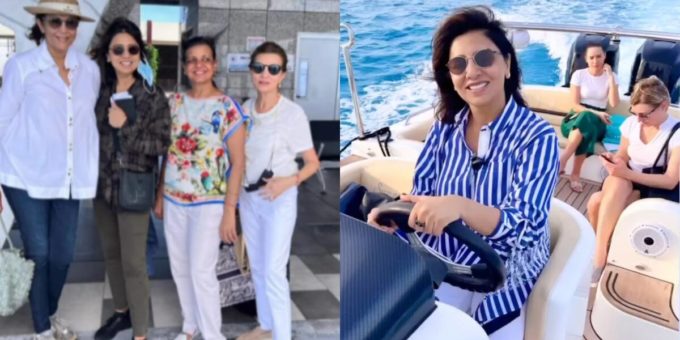 Neetu Kapoor is on a vacation with her girl gang. She gave a glimpse into her ‘detox trip’ on social media. But, the actress didn’t reveal her holiday location. She posted a few pictures as she enjoyed the scenic beauty.

In the photos, Neetu wrote about going on a holiday with some “lovely like-minded friends”. Another photo had the actress dressed in a white and blue striped shirt and white shorts as she took on the wheels of a yacht. Neetu also shared a photo of her meal which she captioned, “Goodness in a bowl”.

Neetu Kapoor also posted a picture of the beautiful sea and wrote, “stunning colour” along with it.

Neetu Kapoor is having some good time. (Photo: Neetu Kapoor/Instagram)

On the work front, the yesteryear diva is returning to films with Karan Johar’s production Jug Jugg Jeeyo. The film also stars Varun Dhawan, Kiara Advani and Anil Kapoor. She wrapped up the film’s shoot in November last year.

Also read |When Neetu called son Ranbir ‘mumma’s boy’, said he tells her about his girlfriends

The 63-year-old actor took to Instagram and posted a picture of herself and said the experience of working on the film helped her regain confidence. “Finally wrapped #jugjuggjeeyo was such a wonderful experience…made some Lovely friends..gained confidence which was so needed at that time..this movie will always be very special,” she wrote.

The family comedy-drama is directed by Raj Mehta, who helmed the 2019 hit Good Newwz. The movie also stars Maniesh Paul and Prajakta Koli. It will hit the screens on June 24.

For First Time Ever, Akhilesh Yadav Will Run For MLA, Say Sources