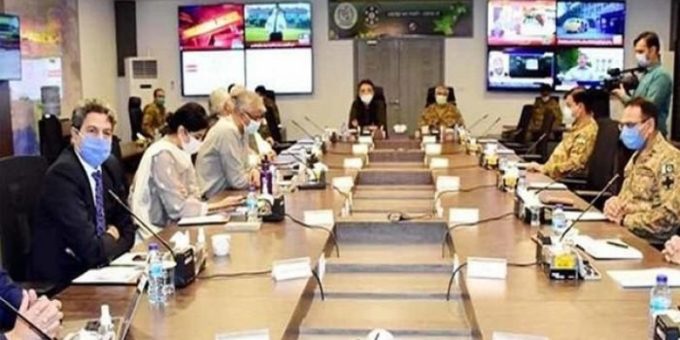 In a bid to control the spread of COVID-19 infection across the country, the National Command and Operation Centre (NCOC) on Sunday announced that it has decided to expand the current coronavirus restrictions to 27 cities of the country, that too beyond the earlier deadline of 31 August.

The body will review the restrictions on September 13.

According to the body, the decision was taken in view of the growing number of COVID-19 positive cases and the ensuing pressure on the country’s healthcare system.

The NCOC said that considering the situation, the scope of the implementation of the SOPs has been extended to 27 cities of the country. Previously, these SOPs were only applicable to 13 cities.

As per the rules, all commercial activities — with the exception of essential services — will be closed by 8pm. Similarly, there will be two safe days each week, which means that markets will remain closed twice a week. However, it will be up to the provinces to decide which days would be considered safe days.

Indoor dining will remain banned across the country, while outdoor dining will only be allowed until 10pm each day. Meanwhile, restaurant takeaway and delivery services will continue to operate 24/7.

Shrines and cinema halls will remain closed, while games such as boxing, martial arts, rugby, water polo, kabaddi, and wrestling will also be banned.

Indoor gyms will remain open to only fully vaccinated individuals, the NCOC said.

On the other hand, railway services will be allowed to operate at a 70% capacity.

The NCOC said educational institutions will operate at a 50% capacity thrice a week.

The body said that it will review the SOPs on September 13.

At the beginning of August, the NCOC had announced revised restrictions for a limited number of cities in the country where the positivity ratio of coronavirus was higher as compared to others.

Addressing a press conference to announce the revised SOPs, NCOC chief Asad Umar had said that the “targeted and staggered” decisions were taken by the government to contain the spread of the virus amid the fourth wave.

Another 69 people lost their lives to COVID-19 in Pakistan, taking the total death toll in the country above 25,600, the National Command and Operation Centre (NCOC) revealed Sunday.

Per statistics released by the NCOC, the country recorded 3,909 new cases in the last 24 hours.

The country’s official coronavirus statistics website (covid.gov.pk) reveals that in the last 24 hours, 62,918 coronavirus tests were conducted across the country out of which 3,909 turned out to be positive.

Meanwhile, the rate of coronavirus positive cases in the country was reported to be 6.21% in the 24 hours.

According to the official portal, the number of deaths from the disease in the country has reached 25,604, while the total number of cases since the outbreak has reached 1,152,481. As of now, there are 93,504 active COVID-19 cases in the country, while a total of 1,033,373 people have recovered from the virus.