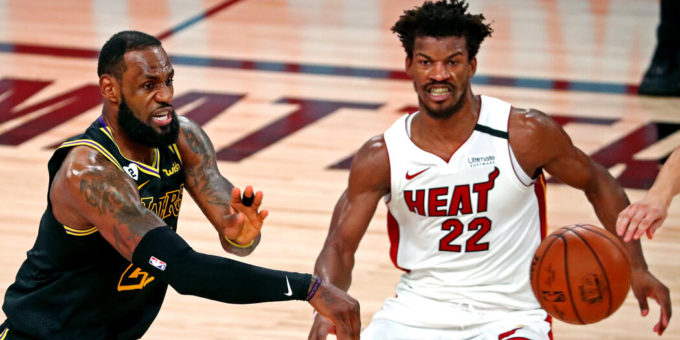 The Miami Heat are in another must-win game tonight, with the Los Angeles Lakers still just one victory from claiming the franchise’s 17th championship.

Behind Jimmy Butler’s second triple-double of the N.B.A. finals, the Heat forced a Game 6 against the Lakers, who were seconds away from victory on Friday. Now the Lakers will turn again to LeBron James, who is seeking his fourth tittle, and Anthony Davis, who is after his first.

Goran Dragic is active for the Heat.

Goran Dragic, the Heat guard, has missed the past four games after tearing a ligament in his left foot during Game 1. It’s unclear how much playing time he’ll get, if any, but at the very least, his presence should be a morale boost for Miami.

Alex Caruso is starting for the Lakers.

Entering Game 6, the Lakers are making an adjustment right from the start: Alex Caruso will make his first playoff start in place of Dwight Howard. Howard has struggled on the defensive end for the finals and having Caruso take his place will allow the Lakers to play small from the outset.

The Lakers’ Danny Green said he has received death threats.

Danny Green, the Los Angeles Lakers guard, told reporters on Sunday that he and his fiancée had received death threats following Game 5.

“I’ve gotten so many messages,” Green said. “I can’t even hit the delete all button. I just don’t read them. I know she probably doesn’t get as many, and she doesn’t have as many followers so she probably can see more of it. I had to ask. I said, ‘Are you getting death threats?’ She’s like, ‘Yeah, you are too.’”

He continued, “I don’t know, because I don’t really pay attention or care, nor am I shaken or worried about it.”

At the end of Friday’s game, Green missed a wide-open jumper that could have won the game for the Lakers and sent the team to their 17th championship. Green finished the contest with 8 points on 3-of-8 shooting. Several of his teammates had far worse games, but Green was targeted in particular for scorn, especially on social media.

One of the most high-profile Lakers fans angry at Danny Green was Snoop Dogg, who on his Instagram story, posted several expletives directed toward Green.

Of the vitriol, Green said: “Fans are emotional. I hope they don’t take it that seriously. I hope that they are that passionate about voting or injustice.”

Miami has been hot from 3-point range.

LAKE BUENA VISTA, Fla. — Duncan Robinson was struggling with his 3-point shot in the N.B.A. finals, and that was a problem because shooting 3-pointers is the one thing he does exceptionally well. Jimmy Butler, his teammate on the Miami Heat, invited him to his hotel room for a late-night chat. It was a pep talk with a heavy dose of tough love.

“He’s hard on me, but it’s because he expects a lot,” Robinson said. “I welcome that. I love that. This whole team wants me to be aggressive and do my job.”

Butler has done pretty much everything in this finals series — including motivational speaking — and he delivered again in the Heat’s 111-108 win over the Los Angeles Lakers in Game 5 on Friday night, collecting 35 points, 12 rebounds 11 assists and 5 steals. The Lakers lead the series, three games to two, ahead of Game 6 on Sunday night.

And Robinson did his job, too, even though the Lakers had arrived ready to celebrate.

It’s not the crown he’s after, of course, but LeBron James has moved to No. 1 on the N.B.A.’s career list for most playoff games no matter how Sunday night plays out.

This Game 6 is the 260th playoff game of LeBron’s career, taking him one beyond the longtime former Lakers guard Derek Fisher. The Lakers need one more win for the fourth championship in James’s 10 career trips to the N.B.A. finals.

‘I focus on earning money and then leaving Hong Kong’