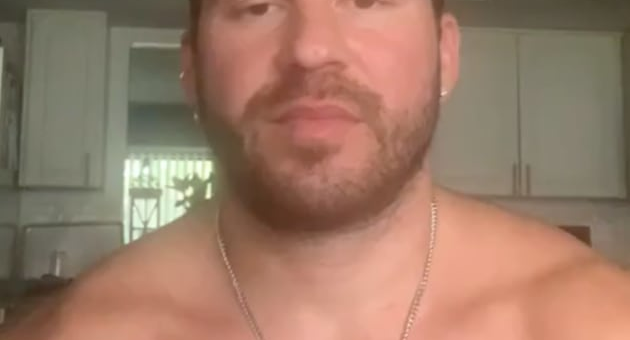 Jenelle Evans has a history of dating terrible men.


Like, really just the worst guys you could imagine.


She’s married to the worst of the worst now, David Eason, but just before she met him, she was engaged to Nathan Griffith, who is no prize either.


For a long time, David and Nathan hated each other, but now that all seems to be changing.


And here’s what Nathan has to say about it …

But one thing he’s always gotten right is his low, low opinion of David Eason.

Well, until he changed his mind and gave him a “peace gathering” gift, as Jenelle would say, but more on that in just a minute.

Nathan and David hated each other from the beginning — although to be fair, David definitely hated Nathan a whole lot more.

Jenelle had split from Nathan just a few weeks before she started dating David, but since they, you know, had a kid together, she still had to keep in touch with him. And David did not care for that, not one bit.

David tried to take control of the situation pretty much immediately. He insisted that he be the person to communicate with Nathan about Kaiser, and he even once threated to “fill this entire street with uppercut” because he was so intimidated by him.

A very popular (and extremely believable) theory is that David treats Kaiser differently because he looks exactly like this father, and how pathetic is that?

So yeah, David and Nathan did not like each other, and for a long time that was all it was, and then Nathan and his mother, Doris, started accusing David of abusing Kaiser.

This started a few years ago — Doris tried to get emergency custody of Kaiser, and she told the court several horror stories that she’d heard from Kaiser and that she witnessed herself. She said that Kaiser had told them once that David punched him in the head, and she said that she’d gone to Jenelle’s house to pick the boy up only to find him and the other kids playing outside unsupervised.

Doris had to drop the case for personal reasons, but the issue was far from resolved. In 2018, Kaiser went for a vist with Nathan and Nathan refused to give him back to Jenelle and David after seeing some marks on his backside. He said that Kaiser told him that David had hit him with a stick.

Police were called, as was CPS, and Nathan was allowed to keep Kaiser while they investigated. But nothing came of that, of course.

Less than a year later, CPS placed Kaiser with Nathan once again after David killed Jenelle’s dog. And once again, nothing came of it, and after about six weeks of court dates, the poor kid, along with his siblings, were sent back home.

And that whole entire time, Nathan has been absolutely certain that David was abusive towards his son. He’s said it countless times, he kept promising that he would take Jenelle to court and get custody, and he even shared a photo of those horrible bruises on Kaiser, all to prove his point.

And that’s why everyone was pretty confused a few days ago when Jenelle revealed that Nathan had given David a gift.

“You know what I think is super adorable?” she tweeted on Thursday. “The way [Nathan] bought a new Trump flag for David. Glad everyone is on the same page now.”

She added a “coparenting” hashtag, and another tweet that read “Never in a million years would I think those two would get along.”

It was weird, because how are you going to suddenly decide to make friends with a guy you’ve claimed has been abusing your kid for years?

It was so weird that a lot of people just flat out thought Jenelle was lying.

But in an Instagram comment, Nathan confirmed that he had, in fact, given David a Trump flag, and that they are getting along now.

And his reasoning … well, let’s just get into it and then we can decide if it makes sense.

In response to someone who asked him why he’d make friends with David, Nathan wrote “Yes, let’s make enemies with someone who is with my son 75% of the time. That makes perfect sense.”

He continued the sarcasm with “Let’s show my son how immature two grown men can be. That’s awesome! Why didn’t I think of that?”

He then stopped goofing and wrote “No, that’s not who I am. I want my son to learn compassion, love, kindness, maturity and how to be a MAN. Not a childish fool that holds grudges and puts his son in a worse position.”

“David and Jenelle have my son,” he said. “So, if I have to kiss their freaking butts for 12 more years I will.”

And there you have it.

It’s hard to imagine what caused this huge change of heart, because one could definitely argue that if he wanted to teach his son something, the lesson shouldn’t be “Being a man means making friends with the guy that abused your child.”

But if we had to guess, we’d say it has something to do with another thing that Jenelle recently revealed — she’s said that she and Nathan have settled their custody case outside of court, and that Nathan now has unsupervised visits.

So maybe he’s feeling thankful about that? Maybe he knows that with how things have gone in the past, he probably wouldn’t have gotten custody of Kaiser now anyway, so he’s just glad that Jenelle cut out the supervised visits?

It’s hard to say. We never know why any of these people act the way they do, and isn’t that a blessing in a way?

What do you think about this brand new friendship?