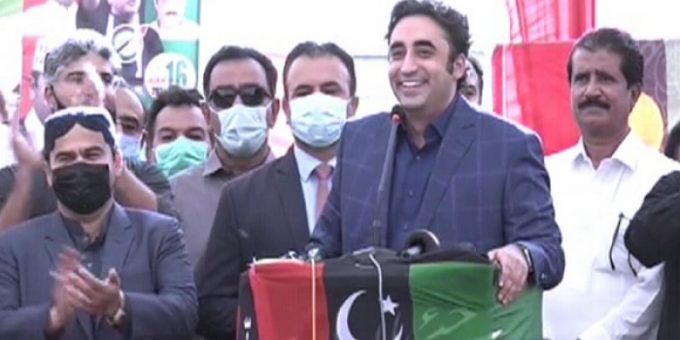 Bilawal Bhutto-Zardari on Sunday congratulated the PPP’s workers and supporters after the party’s candidate Qadir Khan Mandokhail emerged victorious in the NA-249 by-election, after votes were recounted.

The party had much to celebrate for, as its candidate was declared the victor by the Election Commission of Pakistan (ECP) with an even wider margin after votes were counted once again on the Opposition’s insistence.

“Congratulations to workers of Pakistan Peoples Party on winning NA249 Karachi. After recount we’ve expanded our lead to over 900+ votes. False accusations have been exposed, the truth has prevailed,” tweeted the PPP chairperson.

Bilawal took a shot at the government as well, saying that Karachiites “have rejected selected & placed their hopes in PPP”.

After a recount of votes polled across all 276 stations, Mandokhail got 15,656 votes, whereas PML-N candidate Miftah Ismail secured 14,747,. This means that the PPP candidate was ahead of the second-placed Mistah Ismail by a margin of 909 votes.

When the unofficial by-poll results were first announced, Mandokhail won with 16,156 votes, whereas Ismail came in second with 15,473, resulting in a difference of 683 votes.

The low margin of votes had prompted Ismail to petition the ECP to hold a recount. The ECP, accepting Ismail’s application for a hearing, issued a stay order, withholding the results of the by-poll.

On May 4, following a hearing, the ECP had ordered a recount on May 6, which was boycotted by all parties except for the PPP.

The vote recount hit a snag when candidates objected to unsealed bags that were brought for a recount and came out of the District Returning Officer’s office in protest.

The PTI had gone so far as to file a petition with the ECP seeking annulment of the by-election in NA-249 due to alleged rigging.

However, ECP officials decreed that “the recount process will be completed as per the order”.