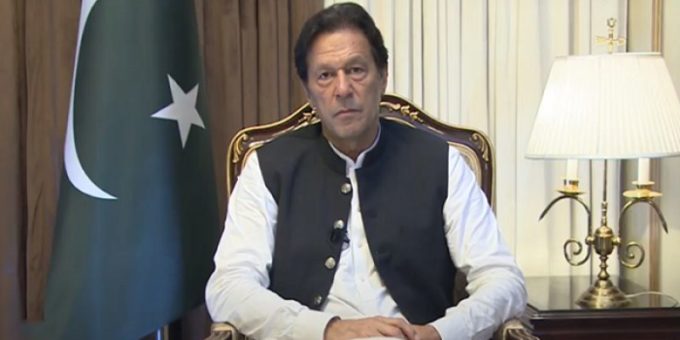 Prime Minister Imran Khan on Friday appeared before a district and sessions court via video link from his office to record a statement in a defamation suit worth Rs10 billion filed against the Pakistan Muslim League-Nawaz (PML-N) senior leader Khawaja Asif.

While appearing via video link before Additional District and Sessions Judge Muhammad Adnan, the premier submitted an affidavit against the PML-N leader for levelling allegations of non-transparency, money laundering and use of anonymous companies in the Shaukat Khanum Memorial Trust funds.

PM Imran said that Asif also alleged that he was said to be a person who played satta [betting] with the charity money.

“My life from a very early age has been an open book,” PM Imran stated in the affidavit. “The people of Pakistan have loved and admired me as a human being and have believed in my financial integrity despite whatever personal vilification regarding my early life as an international sporting superstar I have faced.”

The prime minister informed the court that Asif’s statements were “false and were made and published to injure my reputation”, adding that the statements subjected him to unjust criticism.

Apart from the defamatory tone and tenor of the defendant, the premier said that the PML-N leader alleged that he being the chairman of the Board of SKMT was personally responsible for making investments out of Zakat funds in a non-transparent manner through Benami companies set up to enable the non-transparent investment.

In the affidavit, the premier said that Asif claimed that he [Imran] had acted in a manner worse than the notorious “Double Shah” who defrauded a large number of people.

PM Imran added that Double Shah was the alias of a notorious fraudster whose case came to light a few years earlier and who had deprived thousands of people of their hard-earned savings by extracting funds based on false representations.

“Comparing me to the said Double Shah is the worst form of defamation that has been caused to me by the defendant [Asif],” PM stated. He added that the allegations made against him were pertaining to two sets of transactions made by the Endowment Fund of SKMT which were disclosed in the financial report for the year 2010, and published on SKMT website.

The first set of transactions made into an issue by the defendant related to ABN-AMRO Bank Notes, the prime minister stated, saying Asif portrayed the deposit of funds by the Endowment Fund in various ABN-AMRO Bank Notes as a suspicious transaction. He added that the deposit of funds yielded a return that is duly reflected in the financial statement for the year ended 2010.

The second transaction pertained to the investment made out of the Endowment Fund of SKMT of a sum of $3 million in Cinnabar – a company involved in a housing development project in Oman, and details of which were disclosed in the financial statement of SKMT.

“The investment decision was made by the Investment Committee of the Board of SKMT of which I was not a member,” PM Imran informed the court.

He maintained that “no Zakat money was utilised in this transaction and neither was any Benami transaction entered into”. Referring to the 2010 financial statement, he said, “Out of Rs807,018,400 that were collected as Zakat in the year 2010, not one rupee of Zakat was transferred to the Endowment Fund.”

On conveying the impression that an offshore company was equivalent to a Benami company, the PM stated that “this is absolutely not the case”, adding an offshore company is simply a company registered outside the jurisdiction where it is conducting its primary business.

“I could only have laundered money if, as is falsely alleged by the defendant, the donations and Zakat given by the public of Pakistan to SKMT were the proceeds of crime and that I and SKMT knew that these were the proceeds of such crime,” PM argued over the allegations of money laundering.

“The statement of the defendant that money laundering took place was completely false,” he said adding the Asif made the allegations knowing fully well that damage to his standing and esteem would hurt SKMT.

“The Defendant is liable to make good all the losses caused to my reputation and pay damages commensurate with such losses,” PM Imran added. “I conservatively estimate such losses to be a sum of Rs.10,000,000,000/- (Rupees Ten Billion Only) as damages, which may kindly be granted to me.”

The statement issued from the PM Office stated that running e-courts was a welcoming step as it saves time and money of the court and swiftly helps deciding cases.

“The judiciary and government agencies deserve commendation for the successful introduction of e-courts,” the primer was quoted as saying. He along with his counsel, Senator Waleed Iqbal, participated in the court proceedings from the PM Office, it added.