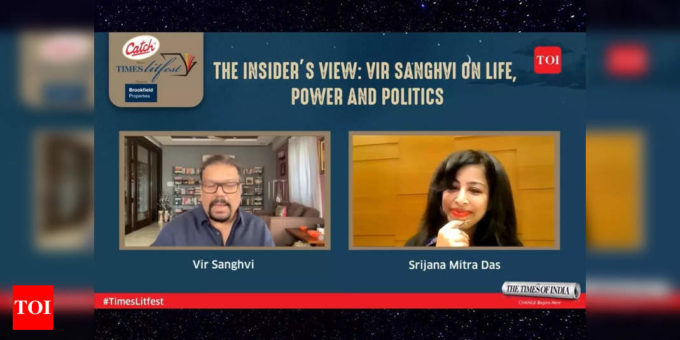 Long before 1991, when India was imbued with a sense that anyone can make it, Mumbai of the 1970s was full of people who came from nothing and did spectacular things, said Vir Sanghvi, journalist and author of the memoir ‘A Rude Life’, in a session of the Times LitFest. The examples of this can-do spirit he cited were Dhirubhai Ambani, who went from petrol pump attendant to tycoon, and Amitabh Bachchan. “Amitabh was a business executive in Calcutta who worked for a company called Bird and Company. He gave it all up, came to Bombay to become an actor and had tough times – one night, he slept on a bench in Marine Drive – but he made it. There was that sense about Bombay, which I think the rest of India has perhaps caught up with, that anything can happen.”

During the session, Sanghvi discussed his experiences – personal and political alike – spanning decades. For instance, he detailed the disillusionment that was felt with Indira Gandhi as Sanjay Gandhi was thrust into the spotlight out of the blue. “People had vaguely heard about him. We knew one of her sons was a quiet pilot who didn’t want to get involved in politics and the other was a motor mechanic of some description and he used to hang out with characters who could charitably be called thugs.” This, he added, was the real beginning of dynasty politics.

In his book, he recounts Benazir Bhutto telling him that the ISI had persuaded Osama Bin Laden to stick around in South Asia, even after the first Afghan war. Did this mean that the ISI must have known about 9/11? “The ISI had very close links with the Taliban which sheltered Osama. The plot was hatched in Kandahar and parts of Afghanistan controlled by the Taliban, with the assistance of the ISI. It’s hard to believe that an international plot of this magnitude could happen without some ISI guys being involved.”

The evolution of Indian media also came up for discussion. “The language they have adopted on television is not the language people used to adopt in debates, it’s the language of Twitter. Political spokespeople have effectively become troll farms with their lips moving,” he says, comparing debates to WWF.

Solution to economic downfall is not changing portfolios: Maithri

Taste Of Bengal: Experience Kolkata Classics At The Oberoi, Gurgaon