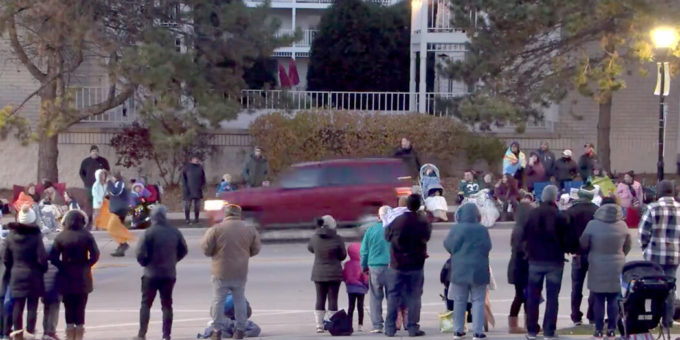 WAUKESHA, Wis. — It was supposed to be a celebratory night in Waukesha, Wis. Dance groups and marching bands and local politicians were marching along Main Street in the Milwaukee suburb’s Christmas parade, which was returning from a pandemic hiatus.

Then, just before 4:40 p.m., the driver of a red S.U.V. stormed through barricades and barreled through the crowd, killing multiple people and striking more than 20. Fire officials said 23 people, including many children, were taken to hospitals with unspecified injuries. It was unclear how many people died or why the attack took place.

“Today our community faced horror and tragedy in what should have been a community celebration,” said Mayor Shawn Reilly, who described seeing smiling children and happy parents when he marched along the parade route before the attack. “I’m deeply saddened to know that so many in our community went to a parade but ended up dealing with injury and heartache.”

Chief Daniel Thompson of the Waukesha Police Department said on Sunday night that a person of interest was in custody and that there was no further threat. Eyewitnesses described the driver as male, but that was not confirmed by the police. Chief Thompson said shots were fired by the police at the driver.

Andy Brodzeller, a spokesman for Children’s Wisconsin, said the hospital had admitted 15 patients on Sunday. The hospital treats only pediatric patients. Details about their conditions were not immediately available.

The assault spoiled what participants and onlookers described as a joyous night in which more than 60 groups, from the Waukesha Fire Department to the Old Car Club to the Waukesha Xtreme Dance troupe, were scheduled to march through downtown.

Tyler Kotlarek, 28, was watching the parade with family members when they heard what at first sounded like cheering but then they realized “it was screams,” he said. “It was the worst thing I’ve ever seen in my life.”

Mr. Kotlarek said the driver appeared to intentionally steer toward people. That account had not been confirmed by the police.

“He was going from side to side, targeting people,” Mr. Kotlarek said. “The car bombed through. He was flying through there going intentionally from left to right.”

Tom Hickey, 25, was walking near a friend’s float at the back of the parade when he heard honking behind him. A man wearing a sweatshirt and gray hat who was driving a red Ford Escape was trying to make his way through the crowd, he said. Mr. Hickey said he thought the driver was lost.

Then, the driver took a right turn onto the main parade route, gunned the engine and moved through the parade route at what appeared to be top speed, he said.

“When he made that right turn, that’s when he turned really dangerous,” Mr. Hickey said.

Angelito Tenorio, a Democratic candidate for state treasurer, had just finished marching in the parade and was circling back to Main Street to catch the rest of the parade with his family when he saw the S.U.V. speeding along the parade route.

“All of a sudden I heard a loud bang,” said Mr. Tenorio, an alderman for nearby West Allis. “Then I heard deafening cries and screams. It was very gut-wrenching.”

He described a chaotic scene that left him stunned and shaking.

“People were running away, leaving their belongings behind, sobbing,” he said. “When the crowd cleared out, it looked like there were people on the ground who might have been struck by the vehicle.”

In a video posted on the city’s Facebook page, the S.U.V. can be seen speeding down the parade route and screams can be heard from those in the crowd. Then, seconds later, a police officer runs down the parade route, followed by a number of police vehicles as a group of children in the parade stops performing.

Gov. Tony Evers of Wisconsin said on Twitter that he and his wife were “praying for Waukesha tonight and all the kids, families and community members affected by this senseless act.”

“I’m grateful for the first responders and folks who acted quickly to help, and we are in contact with local partners as we await more information,” he said.

Don Paul Browne, a city alderman, was marching in the parade with the mayor but had already left and did not witness what happened. He said the city was celebrating its 125th anniversary.

He described the parade as a family-friendly event that draws spectators from other counties. He struggled to understand what happened, he said, because there were no political undertones or controversy connected with the parade.