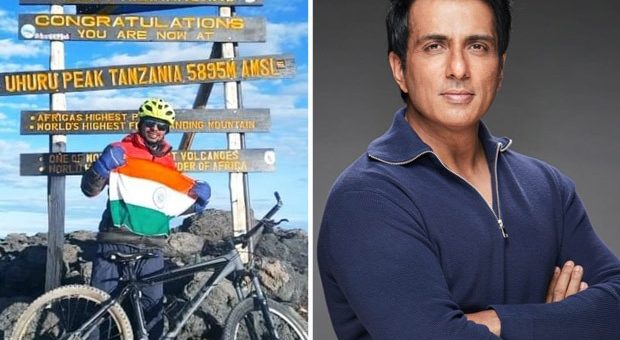 Ever since the pandemic hit the country, Sonu Sood has been hailed as the hero of the masses for the relentless help which he has been providing throughout this time. Recently he was touched by the glorious feat of mountaineer and cyclist Uma Singh, 25, hailing from Gorakhpur, Uttar Pradesh. The young man has conquered the top of Africa’s highest peak, Mt. Kilimanjaro, and dedicated his accomplishment to his idol, Sonu Sood.

Mt Kilimanjaro is one of the most difficult mountains in the world to climb, and Uma cycled up to the first base point, which itself is a huge achievement. Talking about why he dedicated his achievement to Sonu Sood, Uma said, “For the first time in my life I have met a real-life hero and I want to do something for him. He stood up for our country in difficult circumstances, regardless of his own life. You are the real hero of our country, Sonu Sood sir, and the elder brother to everyone in India.”

After reaching the top, Uma opened up a poster of Sonu Sood that read, “The real hero of India.” Touched by his gesture, Sonu Sood said, “I feel so proud of Uma that he went ahead to achieve something so difficult. It is his hard work and determination that helped him to attain this feat. I feel so moved by his gesture and his words. He is an inspiration for our youth. Such determination at such a young age shows that if our Indian youth fix their hearts at doing something, they will achieve it by all means possible. Congratulations Uma and thank you for your kind words.”

Uma will be soon landing back in Mumbai, and Sonu Sood has promised to meet him and thank him personally for this great gesture.

Katrina Kaif was a sight to behold in birthday pictures from Maldives; take a look
2022-07-17