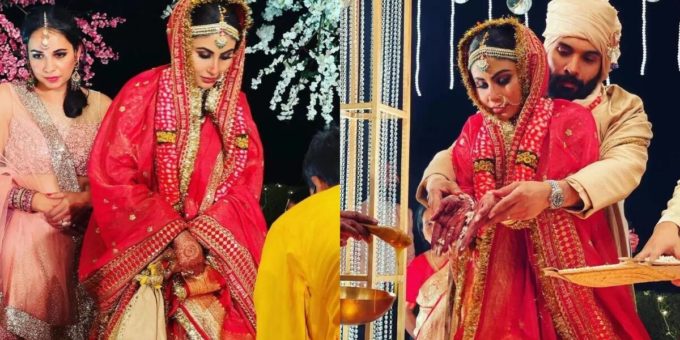 Actor Mouni Roy took wedding vows with Dubai-based businessman Suraj Nambiar on January 27 in Goa. The couple first solemnised their relationship following south Indian tradition. Later in the day, they tied the knot as per the Bengali tradition.

While Mouni was seen in a white saree with a deep red border and gold jewellery for the Malayali wedding, for her Bengali wedding, the actor ditched the traditional Bengali trousseau. Instead, she wore a red lehenga. Suraj was seen in a beige coloured sherwaani.

A few videos and photos from the ceremony surfaced on fan accounts of the actor. Following the Bengali tradition, Mouni entered the wedding venue on a wooden plank, with her face hidden with a betel leaf. She was carried to the mandap by her brother Mukhar Roy, Rahul Shetty, Pratik Utrekar and Manmeet of Meet Brothers.

Earlier in the day, Mouni Roy shared pictures from her Malayali wedding on social media and wrote, “I found him at last ..♥Hand in hand, blessed by family & friends , We re married!!!!!!!!!!! Need your love and blessings…27.01.22 Love, Suraj & Mouni.”

Ranbir Kapoor and Shraddha Kapoor to resume shooting for Luv Ranjan’s next after the director’s wedding in February : Bollywood News

Before Annabelle Comes Home, here is a ranking of all films in the Conjuring universe
2019-06-26