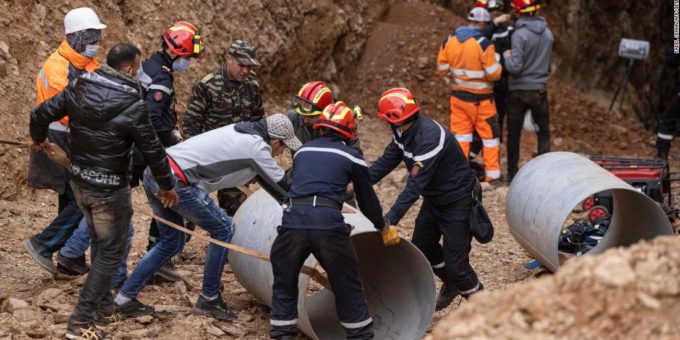 The child, who is called Rayan, is stuck in the well which reaches more than 100 feet (30 meters) underground in Chefchaouen province.

“People who love us are sparing no effort to save my child,” Rayan’s father said as he stood watching rescue efforts on Friday night, Reuters reported.

Live feeds on state-owned Al-Aoula TV said Friday afternoon that the diggers still had to cover 6.5 feet vertically and just under 10 feet horizontally to reach the boy.

The child fell into the well Tuesday afternoon and was discovered after he was heard crying, his mother said in an interview with Al-Aoula two days later. She said he was playing in a nearby area before disappearing for a brief time, and that she was quick to call authorities after hearing him.

His father told Al-Aoula that the authorities sent food and water down the well, and that he saw his son drinking some water.

“He was moving, and drank a little bit of water. I believe he will be okay, God help him,” he said.

Local media also reported that the child had taken food and water that was dropped down to him using a rope on Thursday.

The authorities are using machinery in the difficult operation because the diameter of the well is only just over a foot and a half wide, Al-Aoula reported.

The Arabic hashtag #SaveRayan has going viral across North Africa, as the desperate mission continues.

A member of the rescue team told MAP that while the excavation work has been ongoing, the rescue operation has reached a “complex stage” and the machinery has stopped from time to time as emergency workers “determine the necessary interventions to avoid the ground collapsing.”

A medical helicopter from the Royal Gendarmerie and medical staff who are specialists in resuscitation from the Ministry of Health are on standby at the scene for when the child is pulled out, MAP said. Five bulldozers are on the scene digging, the statement added.

Extreme exoplanet has a complex and exotic atmosphere — ScienceDaily