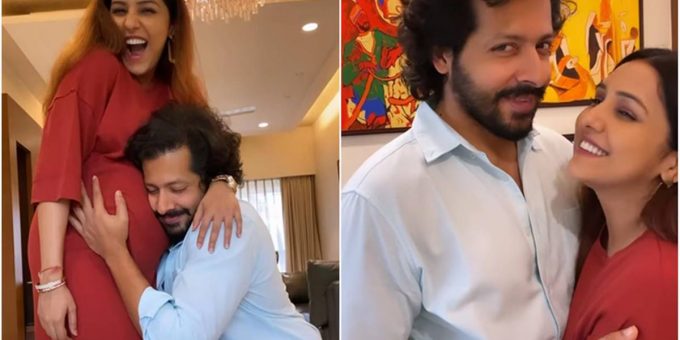 Neeti Mohan found a creative way to celebrate husband Nihaar Pandya’s birthday. The singer, along with the Indian cricketer, grooved to his favourite song “Aap Ke Aa Jaane Se” and posted it on social media. The video, which has been shot and choreographed by Shakti Mohan, Mukti Mohan and Kriti Mohan, has Neeti and Nihaar performing adorable moves and giving cute expressions.

Wishing Nihaar on his birthday, Neeti wrote, “My favorite boy @nihaarpandya ‘s favorite song!! Always wanted this song to be the 1st dance performance of the 3 of us and what better day than your BIRTHDAY.” They are expecting their first child.

As soon as Neeti posted the video, it received a lot of love from her friends. Tahira Kashyap wrote, “You guys are so cute.” Alisha Singh called the video as “the best thing on internet today.” Shivam Mahadevan wished Nihaar on his birthday. Neeti’s contemporary Shalmali wrote, “best only these poeple in this video are <3.”

The video comes after Neeti shared a workout video. The video shows Neeti working hard at the gym and keeping herself fit.

Neeti announced her pregnancy last month on her second wedding anniversary. Sharing adorable pictures with Nihaar, Neeti wrote, “1+1= 3 Mommy to be & Daddy to be what better day to announce than our second Anniversary!”

Taapsee Pannu takes a dig at the recent findings of the Income Tax raid at her home, says, “Not so sasti anymore” : Bollywood News