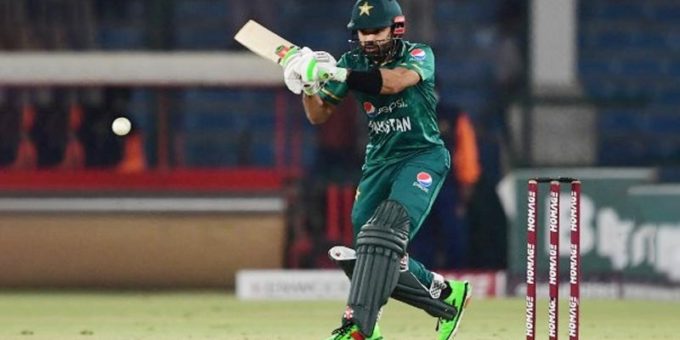 Pakistan wicketkeeper-batter Mohammad Rizwan has achieved another
feat in Twenty20 cricket after his match-winning knock in the third T20I against
West Indies on Thursday.

Rizwan, who scored 87 runs in 45 balls, became the first-ever
batter to score 2000 runs in a calendar year in T20 cricket.

For his brilliant innings in the third T20I, Rizwan also bagged
the award for player of the match.

Scoring 203 runs in three innings, at a strike-rate of 159.84,
also helped Rizwan clinch the player of the series award.

The prolific right-hander also has the most runs, 1326, in T20I
cricket, this year, at a stunning average of 73.66 and strike-rate of 134.89. His
runs tally includes 12 fifties, most by any player this year, and a hundred. He
also stands at the top of the pile in terms of sixes hit this year, with 42
against his name.

Rizwan’s 158-run opening stand for the first wicket with Babar
Azam, in the third T20I against West Indies, also helped the duo break the
record for most hundred partnerships as a pair, six, in T20I cricket. The
record was previously held by India’s Rohit Sharma and KL Rahul, with five
century partnerships.

On Camera, Snatchers Drag Woman 150 Metres On Scooty In Delhi