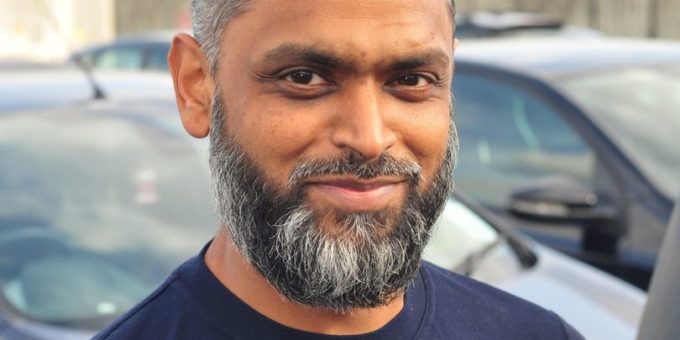 A former prisoner at the notorious Guantanamo Bay detention camp has spoken about Palestine, the war on terror and his experiences of being held without charge for three years.

Moazzam Begg, 52, was wrongly held as an ‘enemy combatant’ by the US government and was brutally tortured.

Born in 1968, he grew up in the Moseley suburb of Birmingham where he was educated at a Jewish primary school and as a teenager joined the Lynx gang who initially formed to fight back against violent far-right groups such as the National Front.

In Pakistan, after the 9/11 attacks, he was kidnapped by the country’s secret service (ISI) in collusion with the CIA. Moazzam had helped to set up education programmes for children but ended up detained for three years mostly in solitary confinement. He was subjected to 300 interrogations, death threats and physical and psychological torture.

At Bagram, he says he was abused, hog-tied, kicked, punched, left in a room with a bag put over his head, sworn at and threatened with having his fingers broken and sexual abuse. He saw two detainees beaten to death with their hands tied above their heads.

He said: “I find it hard to describe the sense of utter desperation and claustrophobia I often felt (at Guantanamo) during almost two years, isolated in a cell smaller than my toilet at home.”

He is the outreach director at CAGE and is an advocate for many Muslim causes. He was held by the US government initially at the Bagram airbase in Afghanistan and eventually at the infamous Guantanamo Bay prison camp.

One of the causes Moazzam is passionate about is the Palestine issue. With the recent flare up of violence between Palestine and Israel there have been unprecedented protests worldwide.

He added: “Though the war on terror began after the 9/11 attacks, the discrimination against Muslims began long before that. There is no denying that many Muslim organisations – and even some non-Muslims – cite the role of America and Israel in destabilising the Islamic world.”

Moazzam believes there should be a united defensive peace- keeping force from leading Muslim countries to protect the Palestinians and safeguard the peace. He also applauds the actions of direct action groups like Palestine Action who campaign against Israeli weapons factories in the UK by occupying them.

On the recent assault on Gaza he said, “The world has risen up, protested and recognised Israel’s crimes, perhaps because of social media or because of the ethnic cleansing in Sheikh Jarrah and the intensity of the war. For the Muslim world, the war began with the assault on the Al Aqsa mosque.”

He also felt Israel has lost any decent public image it had, “The loss of any civilian life on either side is regrettable and tragic but if anyone is responsible for the death and targeting of civilians it is resoundingly Israel.”

The Israeli assault on Gaza resulted in the deaths of more than 250 Palestinians including 66 children and 1900 were injured. In comparison 13 people were killed in Israel and 200 were injured.

He added: “Over the past 15-20 years my work hasn’t focussed only on Palestine, the work I have done especially with the Uyghur Muslims in China is because I was detained with 22 Uyhurs in Guantanamo.

“The Chinese government has used George Bush’s language on the war on terror to do what they have done to the Uyghur people. They try to appease Western nations by saying, ‘Look we have a terrorism problem just like you have a terrorism problem with Muslims, we are also introducing Chinese values by sending them to re-education camps and teaching them how to be proper Chinese citizens.’”

More than a million Uyghur people are detained in re-education camps where they are forced to eat pork and renounce their faith and pledge loyalty to the ruling Communist party.

About his detention and torture by the Americans he said: “I don’t forgive the American military and government as a body I cannot forgive while the abuses in Guantanamo continue. However, there have been several US soldiers who have contacted me, apologised, sought friendship and spoken out about Guantanamo and the war on terror. I forgive them before they even ask.”

From the 780 people who have been detained at Guantánamo Bay since it opened, 731 have been transferred, nine detainees died while in custody and 40 prisoners still remain in the modern day Gulag of which 26 are known as ‘forever prisoners’ who are too innocent to charge but too dangerous to release.

After being freed, Moazzam said in an interview: “I might appear sane and conscious and normal and reasonable and strong in public, in private, in the middle of the night, alone, when I go back over what used to happen, when I relive everything, that’s when it takes its toll, in a horrible way. (Including), screaming and crying and kicking and punching into the air and of course walls, remembering the horrific things that I saw.”