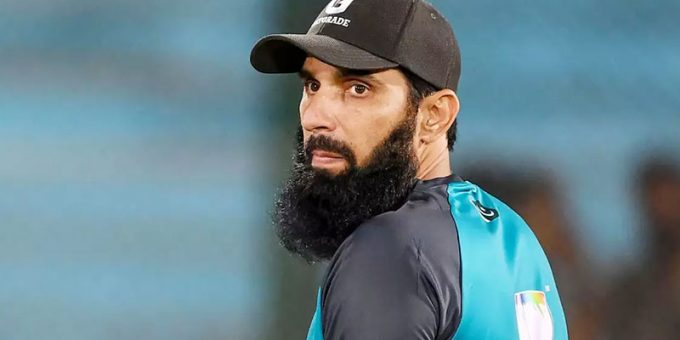 Misbah-ul-Haq has finally parted ways with the Pakistan Cricket Board after resigning as the national team head coach following 24 months of what can be called an average performance.

The 47-year-old stepped down from the post despite having a
year left in his three-year contract, which he signed in September 2019.

The development was also shocking because it happened with
only over two months before the ICC Men’s T20 World Cup.

Here are some numbers from Misbah’s time at the helm of the
Pakistan coaching setup:

15 — is the number of series Pakistan won. This includes victories in four Tests, three ODIs and six T20Is.

8 — is the number of series Pakistan lost, which includes three Tests, one ODI and four T20Is.

Misbah was expected to help Pakistan improve their
performances in Test matches due to his impressive record as the captain of the
national side.

Pakistan performed significantly well in the longest format
of the game during his tenure as head coach. As compared to his predecessor
Mickey Arthur’s run in the format, the Men-in-Green were a much-improved side.

They played 16 Test matches under Misbah’s coaching and
managed to win seven while losing six matches. Arthur’s tenure saw Pakistan win
10 Tests and lose 17 out of a total of 28.

The biggest achievement for Misbah’s side came in the home
series against South Africa, which they won 2-0.

The rise of wicketkeeper-batsman Mohammad Rizwan can also be
credited Misbah. After removing Champions Trophy-winning captain Sarfaraz Ahmed
from all three formats, Misbah was under severe criticism. The fans were taken
by surprise when that decision proved to be a well-thought one after Rizwan
emerged as one of Pakistan’s mainstays.

In the initial days after his return to the national team,
the right-hander struggled a bit. However, fast-forward to 2021, he is the
world’s leading run-scorer in T20Is this year, as well as one of the key
members in Pakistan playing XI.

When Misbah took charge as both the chief selector and the
head coach back in 2019, he had tons of problems to solve, but the T20I form of
the national side wasn’t one of them.

At that time, under the captaincy of Sarfaraz and with
Arthur as head coach, Pakistan were the number one team in the T20I rankings
having won 30 out of 37.

Misbah’s first task after taking charge of both the roles
was against Sri Lanka, who were touring Pakistan with more than half of their
first choice members opting out from the series.

Instead of sticking to the winning combination, Misbah
recalled batsmen Umar Akmal and Ahmed Shehzad, who fell out of choice during
Arthur’s tenure. Misbah’s decision backfired spectacularly and Pakistan found
themselves humiliated by 3-0 drubbing by a second-string side at home.

The side did not only spiral down the rankings all the way
to the seventh place, they also lost the ‘favourites’ tag for the the T20 World
Cup 2020. The event was postponed for a year due to the coronavirus outbreak.
However, Pakistan have not been able to improve their form during this time and
are far from the form required to be considered contenders in the upcoming
tournament.

As a chief selector, Misbah also brought various players,
who played under his captaincy, back in the mix. That move was also a failure
and Misbah was left with no option but to continue with the pool of players
that Arthur left behind.

Misbah made some crucial mistakes during his time as head
coach, one of which was breaking the winning the national team’s winning
formula, which caused Pakistan to lose their number one spot in the T20I
rankings.

He also gave too many chances to players who had already
been tested and failed or the ones whose best days in international cricket
were behind them.

Misbah’s defensive approach, both when he was captain and
the head coach, was also one of his weak points.

Walking out, just before an even as big as the T20 World
Cup, might prove to be a huge blow to the former skipper’s cricketing legacy.