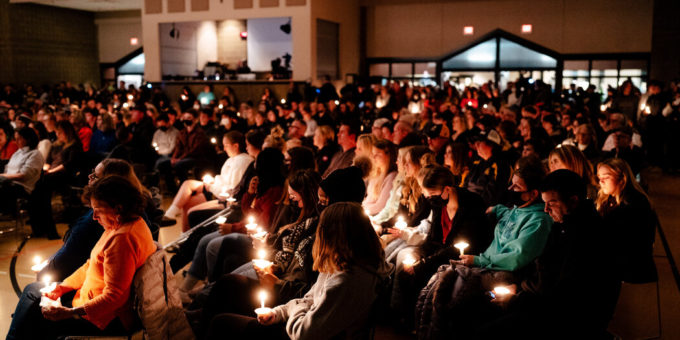 OXFORD CHARTER TOWNSHIP, Mich. — The suspect in Tuesday’s shooting at Oxford High School in suburban Detroit — the deadliest on school property in the United States this year — emerged from a bathroom and started firing at students in the hallway, the authorities said on Wednesday after reviewing video footage of the attack.

The Oakland County sheriff, Michael Bouchard, told reporters that investigators were pouring through many hours of video from security cameras all over the school to track the suspect’s actions, but his targets “appeared random.”

Sheriff Bouchard also said investigators had determined no possible motive for the shooting. The suspect was being held at a juvenile jail early Wednesday, awaiting possible charges in the death of three students and the wounding of eight other people at the school.

The authorities said the suspect was a 15-year-old sophomore, but did not identify him. They served a search warrant on Tuesday night at his family’s house in the village of Oxford, Mich. The sheriff said investigators were examining the contents of his computer and phone, including social media posts.

The gunman fired 15 to 20 shots with a semiautomatic handgun before being apprehended, the authorities said. Michael McCabe, the Oakland County undersheriff, said the suspect, who had been in class earlier Tuesday, “gave up without any problems.”

When the boy’s parents went to a sheriff’s substation after the shooting, they declined to let investigators question their child, Undersheriff McCabe said.

The authorities said that they did not believe that the student had planned the shooting with anyone else and that they were still investigating whether it was a random or targeted shooting.

“I would like him charged as an adult,” Sheriff Bouchard said, adding, “That will be a decision for the prosecutor’s office.”

The sheriff said that a 9-millimeter Sig Sauer handgun used in the shooting had been bought four days earlier by the suspect’s father. Sheriff Bouchard said the gunman was still armed, with seven bullets in the gun, when he was arrested by deputies in a school hallway.

“He is not talking and neither are the parents,” the sheriff said.

Sheriff Bouchard said investigators had been told that the gunman pretended to be an officer in order to access barricaded classrooms. “We know by witnesses he was tugging on doors, and we know from physical evidence he shot through doors up and down more than one hallway,” the sheriff said on Wednesday.

The authorities identified the dead as Hana St. Juliana, 14; Madisyn Baldwin, 17; and Tate Myre, 16, who died in a sheriff’s squad car while on the way to a hospital.

The injured students ranged in age from 14 to 17, officials said, including three who were in critical condition late Tuesday and another who was in serious condition. Sheriff Bouchard described one girl’s condition on Wednesday as “extremely critical.” The only adult who was shot, a 47-year-old female teacher, was discharged from a hospital on Tuesday.

A sheriff’s deputy tried to rush Tate Myre, a 16-year-old who had recently won honors as a linebacker and tight end on his football team, to a hospital on Tuesday after the teenager was shot at Oxford High School.

He died in the patrol car.

“There was no time to wait,” Sheriff Michael Bouchard of Oakland County, Mich., said late Tuesday as the authorities released the names of the three students who were killed. “He tried to load him into the car to get him as fast as he could to a hospital, and he expired in the car.”

On Tuesday night, more than 25,000 people had signed a petition online to rename the school’s stadium after Tate, who had recently earned an all-region award from the Michigan High School Football Coaches Association.

The sheriff said the wounded 14-year-old was placed on a ventilator after surgery: “It’s looking very tough for this young girl.” A hospital spokeswoman said Wednesday morning that the girl remained in critical condition, but had no further updates.

A 47-year-old female teacher whose shoulder was grazed by a bullet was discharged from a hospital after treatment.

In a message posted on Facebook early Wednesday, Sheriff Bouchard said he had just left the school and that it was evident from the scene that the lockdown protocols that the school had in place saved lives.

“My heart aches for families that will never be the same and a quiet sweet community that had its innocence shattered,” he said.

The rampage on Tuesday at Oxford High School, north of Detroit in Oakland County, was the deadliest shooting on school property this year, according to Education Week, which tracks such shootings in the United States and has reported 28 of them in 2021.

The authorities received the first of more than a hundred 911 calls about the shooting at 12:51 p.m. on Tuesday, Michael McCabe, the Oakland County undersheriff, said. Students rushed for cover and barricaded classroom doors with chairs when they heard the first gunshots, and would later describe frantically hiding and then fleeing from the school after long minutes of terror.

“I was just kind of sitting there shaking,” said Dale Schmalenberg, 16, who said he was in calculus class when his teacher heard a gunshot and locked down the classroom. “I didn’t really know how to respond.”

Officials said the gunman fired 15 to 20 shots with a semiautomatic handgun, killing three students and wounding seven others and a teacher, before being apprehended.

The violence in Michigan comes after a reduction in school shootings earlier in the coronavirus pandemic, when some schools held classes remotely. But mass shootings at schools have been a recurring tragedy in recent years. In 2018, a gunman killed 17 people and injured 17 others at Marjory Stoneman Douglas High School in Parkland, Fla. Later that year, a gunman killed 10 people at Santa Fe High School in Texas.

“This is a uniquely American problem that we need to address,” Gov. Gretchen Whitmer of Michigan said.

Here are three students recounting what they saw when the shooting started at Oxford High School on Tuesday. The quotes have been edited for length and clarity.

“I was in my biology room, just like laughing with a couple of my friends, and, just like a normal day. And then I hear gunshots coming from close by — and my mood just switched. I went from laughing to crying in about a second.”

“We just got in the corner, and sat down exactly how we were supposed to — like we followed the protocols that we practiced, and everyone followed. No one talked, we didn’t scream or anything, we were just silent.”

“I was just walking in the hallway. And then just a bunch of kids start running at me. And I didn’t know what was happening. Then one kid yelled, ‘School shooter.’ Said he wasn’t sure, then he saw a trail of blood on the floor.”

“My brother texted my group chat with my parents and stuff. He’s like, ‘Help, he’s right by me.’”

“There’s like loud noises in the school a lot. So we didn’t know 100 percent sure, but since we all heard the same thing, and you know, better be safe than sorry.”

“We just bombarded the door with a bunch of chairs, desk, everything we could find completely got the door shut down.”

The semiautomatic gun used in the shooting at a Michigan high school was purchased by the suspect’s father on Nov. 26, four days before Tuesday’s shooting.

Officials were not releasing the name of the suspect because he had not been charged as an adult. The boy’s parents were not allowing him to talk to police.

The firearm was a 9-millimeter Sig Sauer pistol, and it had seven remaining rounds loaded in the gun when the suspect was arrested, Oakland County Sheriff Michael Bouchard said at a news conference on Tuesday night.

The sheriff said the gun had 15-round magazines. Law enforcement officials found two, but believed the father bought three.

Sheriff Bouchard said that officials did not know if there were other firearms in the suspect’s home, adding that was part of the investigation.

He confirmed that photos of a firearm, posted by the suspect on social media, appeared to be the same gun used in the shooting.

‘The message is that this thing is everywhere’: Doctor with Covid-19 starts virus video diary
2020-10-24