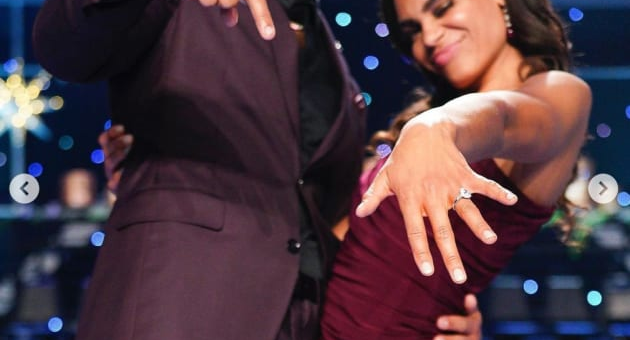 As we prepare to close out 2021, there aren’t many issues on which all Americans agree.


Fortunately, the citizens of Bachelor Nation can at least agree that Michelle Young is one of the most likable leads in franchise history, and she deserves a lifetime of love and happiness with her new fiancé, Nayte Olukoya.


Nayte proposed to Michelle during this week’s Bachelorette season finale, and the Minnesota-based teacher gleefully accepted.


It was the happy ending that fans had been hoping for all season — but as recent events have reminded us, couples who meet on The Bachelor or The Bachelorette don’t have the greatest track record when it comes to longevity.


The recent breakup of Katie Thurston and Blake Moynes is just the latest in a long line of failed relationships that started with on-camera proposals.


So some fans are holding off on congratulating Michelle — especially the ones who were skeptical about Olukoya from the very beginning.


Yes, we got to know Nayte quite well over the course of the season — especially after spoilers revealed him to be the eventual winner, which prompted internet sleuths to dig up everything they could find on the guy.


On social media, viewers expressed doubts about Nayte, and expressed concerns about what they saw as his “cocky” attitude and reluctance to settle down.


They felt that Olukoya’s uneven performance on group dates was a sign of his lack of genuine interest in Michelle.


In short, these people believed that Nayte was not there for “the right reasons.”


So it makes sense that Michelle would set the record straight on a podcast entitled “Here For the Right Reasons.”


“Obviously, there’s this entire journey and then it’s compacted into episodes,” the 28-year-old said on this week’s episode of the Us Weekly-sponsored series.


“[While filming the show] you do have a little bit of this background information and you are there and it’s just more of this thing where you kind of understand, regardless of what you choose or the decisions you make, you’re not gonna be able to please everybody,” she continued.


“And that’s part of dating in the public eye.”


Michelle proceeded to point out that dating on TV is sort of a no-win situation, and Nayte probably would have been judged just as harshly if he had behaved completely differently.


“We will continue to learn how to communicate. And our families and our close friends know exactly who we are. Going into that, I think that’s just kind of what I choose to focus on.”


For his part, Nayte vented some frustration with the show on Tuesday, stating that he feels his storyline was edited in an unflattering fashion.


He’s aware, however, that if it weren’t for the challenging experience of appearing on The Bachelorette, he wouldn’t have found the love of his life.


“[But] at the end of the day, it is just noise. It is just fluff. … I know who I am, Michelle knows who I am. Michelle was able to see me for me so early on. And that’s really all that matters,” he told Us.


“If you think that I’m just saying things to say things, I mean, that’s your opinion,” Nayte continued.


“I know that what I was saying was me just doing my best at trying to explain what was going on inside with all these new feelings, amazing feelings and exciting feelings,” Olukoya concluded.


“Maybe I’m not the best at expressing myself, but Michelle got the point, so that’s what matters.”


Viewers have been wrong about contestants and couples many, many times in the past.


As long as Michelle and Nayte believe in their love, then that’s all that matters.


And it sounds like these two have a firm understanding of that fact.