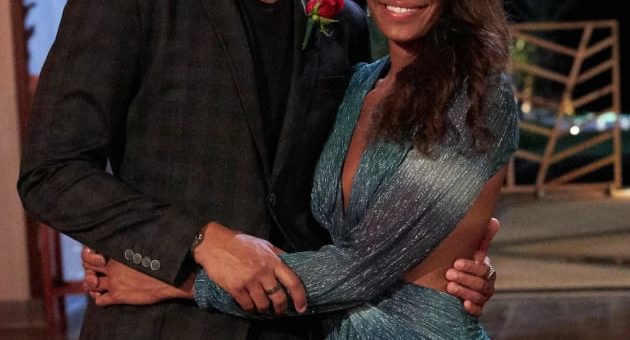 Michelle Young will likely be remembered as one of the most beloved Bachelorettes in the history of the franchise.


But is the love match she made last night the real deal?


As you probably already know, Michelle got engaged to Nayte Olukoya on Tuesday night’s The Bachelorette season finale.


Fans got to know Nayte quite well over the course of the season, and they grew to love him almost as much as Michelle does.


Brandon Jones had quite a few fans, as well, but judging from the reaction on social media, Bachelor Nation was overwhelmingly thrilled to see Nayte get down on one knee and propose to Michelle.


Of course, as the Katie Thurston-Blake Moynes breakup reminded us, sometimes even the most promising pairings can go bust after the cameras stop rolling.


So what’s the latest on Michelle and Nayte?


Well, according to a new interview in People magazine, these lovebirds are more head over heels for each other than ever before!


“I fall more in love every day,” Young tells the magazine.


“I was fortunate enough to grow up in a family with a healthy marriage and I thought, I’m not going to give up until I have that. He’s my person. And I didn’t know I could love at this level.”


Olukoya echoed that sentiment, telling the outlet that that he’s overjoyed at the prospect of spending the rest of his life with Michelle.


“It’s so natural for us to be together. I’ve never felt the way I feel before. I’m all in!” he said.


“Nayte and I always had an undeniable connection,” Young added.


“I thought, ‘I’m in trouble!’ But even when I was falling in love, I wanted to make sure it wasn’t infatuation.”


Nayte acknoweldged the fact that he didn’t always put his best foot forward during group dates, but it seems he was confindent that Michelle would see through his initial nervousness.


“I suck at expressing myself,” he said with a laugh.


“And it’s an unnatural environment. But the best thing I could do was just focus on Michelle.”


Nayte added that he was nervous to propose to Michelle, but again, he was emboldened by their natural connection.


“It was the best-case scenario, but it was also terrifying,” he told People.


“I had a conversation with Michelle and I was like, I want you to know I’m scared.’ But at the end of the day, I’ve never been so aligned with how I feel about somebody,” he added.


“When I closed my eyes and thought about the future, I saw her next to me. So I was very confident and comfortable to get down on one knee. And I’m so glad she said yes!”


Both Michelle and Nayte are aware that life post-Bachelorette is very different from life on the show.


But Young assures fans that their feelings are stronger than ever, and they’ve been spending their days “dancing, singing and goofing around.”


“You can have all these passionate moments but when you get into the real world, are you a person who’s going to stick in and hold on and work through things?” Young observed.


“That’s when I truly understood the depth of Nayte. He said love changes, but it doesn’t mean you love each other any less.”


“The show only lasts so long,” Olukoya chimed in.


“Now it’s done and we’re just two people madly in love going down this road. And we’re each other’s rocks for life.”


Over the years, we’ve learned not to try and predict the future of couples who meet on The Bachelorette.


But it certainly sounds as though these two are in it for the long haul!

Sourav Ganguly Had No Business To Speak On Behalf of Selectors: Dilip Vengsarkar