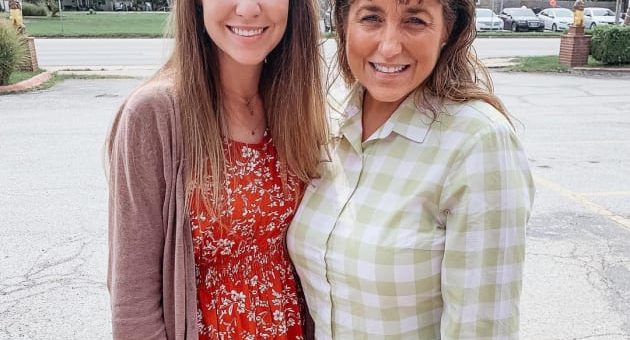 Following his arrest and bond hearing, Josh Duggar was released and is now living under strict bond conditions.


That meant that Mother’s Day celebrations were out of the question, even if anyone was in the mood for them.


But she very pointedly excluded any mention of Josh, and fans couldn’t help but notice.


In the image, wearing their conspicuous cult attire, are Jana and her brother, John David, as small children.


They are standing beside Michelle in a photo that is by this point nearly three decades old.


“We had a wonderful time celebrating this incredible woman today,” she gushed.


Jana added: “I am honored to call her my mom!”


Those are an awful lot of compliments in such a short post.


There is always much to be said about any praise that Michelle receives.


Namely, it is undeserved.


It is easy to view Michelle as just a caricature.


She’s not just a silly woman with a tired uterus and bad hair.


She is a bad person who doomed her children to their current lives.


But needless to say, listing Michelle’s unforgivable wrongdoings could take all day.


No one expected Jana to do so in her Instagram tribute for Mother’s Day.


Particularly not while she remains so financially dependent (by design) upon her father.


But what was at the forefront of everyone’s mind was what made this Mother’s Day unlike those in the past.


Namely … Josh Duggar’s arrest, just a couple of weeks ago.


He was charged with possessing video and dozens of images featuring the sexual abuse of extremely young girls.


This is relevant to tributes to Michelle on Mother’s Day for two reasons.


First, because this is her son. This is Jana’s brother.


It’s an awkward at best situation, but there could have been some acknowledgement. There was not.


At times, it feels like the Duggar family is mostly just sticking to the party line.


Most of the adult children have released similar statements … in some cases, pursuant to their own agendas.


For example, Jessa and Ben put out a statement condemning “any forms of pornography.”


Meanwhile, siblings like Jinger and Joy-Anna and their respective husbands more properly condemned the abuse and exploitation of children.


Right now, it’s just sort of weird for fans to see Jana or anyone else in the family post about something other than their infamous brother.


But there is another reason that Jana’s tribute to Michelle has fans feeling a certain way.


For so much of who Josh is and what he has done, a tremendous amount of blame falls on Michelle and Jim Bob.


They set the stage for Josh’s first sex crimes, and then continued to enable him ever since.


When Josh was 14 years old, he molested multiple extremely young girls, including several of his own sisters.


While we would never accuse Jim Bob or Michelle of treating children well, their reaction was ultimately to protect their son.


A ritual shaming is not justice or treatment. A crime was committed, and they treated it as a spiritual ailment.


The cult in which they chose to raise their children was the perfect stalking ground for sexual predators.


Lots of young girls, shamed for their bodies, taught that a man’s every thought was their fault, and lacking the language to explain their experiences.


This was not an accident, of course. Bill Gothard designed things to be this way.


The way that the cult views human sexuality meant that any transgressions are painted with the same brush.


Instead of real therapy, Josh received unqualified “counseling” and his crimes were covered up.


Additionally, the family’s beliefs made it essentially mandatory that they all — especially his victims — continue to associate with him.


Firstly, cult solidarity means that anything can be forgiven except for leaving the cult, which is anathema.


Secondly, because it’s clear that they believed that Josh’s crimes and the later exposure of them was a literal attack by the devil against their family.


So what happened? Jim Bob and Michelle continued to prop up Josh within the community.


And now he is accused of accessing footage of young lives being ruined, when every download encourages monsters to produce more.


Hard to celebrate a mother who cared so little for her own daughters and other little girls that she would cover for and enable Josh, don’t you think?

Gianluigi Buffon To Leave Juventus At The End Of The Season