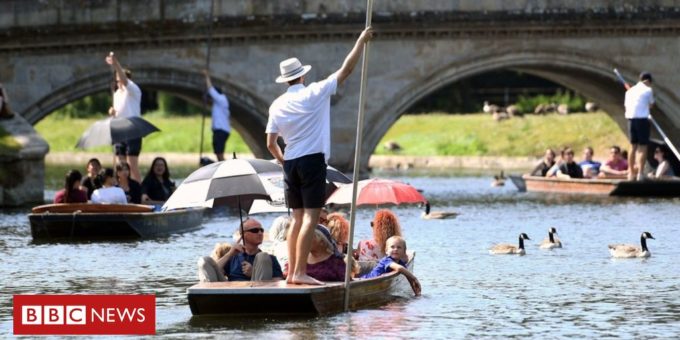 The UK’s highest-ever temperature has been officially recorded in Cambridge, the Met Office has confirmed.

A Met Office official was sent to check the equipment before verifying the new record on Monday.

Staff working at the garden on Thursday tweeted: “No wonder we all felt as if we’d melted.”

Daily temperatures have been measured by the weather station at the site in the south of the city since 1904.

Horticultural team member Katie Martyr, who took the reading on Friday morning, said: “I thought straight away it was incredibly high but not in my wildest dreams did I think it would be the highest ever moment.

Sally Petitt, head of horticulture, said: “To have recorded… the highest UK temperature ever serves as a further reminder that we all need to be taking climate change and its impacts seriously.”

Cambridge University Botanic Garden director, Beverley Glover, said: “We are really pleased that our careful recording of the weather, something that we’ve been doing every day for over 100 years at the Botanic Garden, has been useful to the Met Office in defining the scale of this latest heatwave.

“However, we can’t help but feel dismay at the high temperature recorded and the implication that our local climate is getting hotter, with inevitable consequences for the plants and animals around us.”