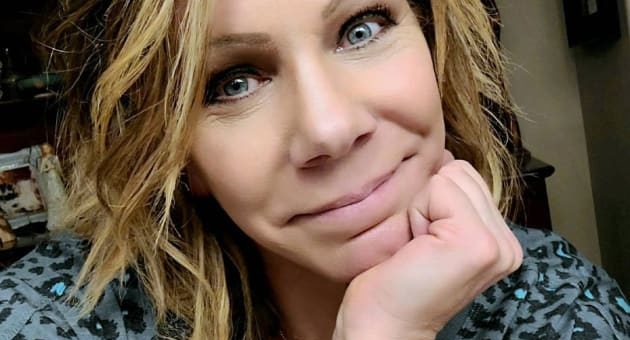 
We know you don’t want us to go there.


We know you’ve told us off in the past and tried your hardest to make it clear that you’re committed to your marriage.


Just over a month after Meri poured her heart out, telling off all haters and stating for the record that she definitely loves spiritual husband Kody, the Sister Wives star shared a lengthy message on Instagram.


She did so in celebration of turning 50 years old.


And she only barely mentioned Kody at all in her quasi self-tribute.


“Well, this is it guys, officially the last night of my 40’s!” wrote Meri on Friday, adding:


“I’m not freaking out, I’m not sad, I’m not struggling with it, it’s been a good decade!”


This is great to hear.


Notably because Meri hasn’t always seemed so happy on social media or on television, especially when squaring off with Kody and/or arguing with him in couples therapy.


Remember, Kody did say last year that he wishes he had never married Meri.


The Sister Wives veteran proceeded to reflect on that last decade of her life, writing:


“The past 10 years I’ve watched my kid grow up and finish college, both undergrad and masters, and find an amazing partner, plus a couple cute puppies too!


“I’ve moved a few times, won a lawsuit, wrote a book, made tons of friends across the country, and started a couple thriving and successful businesses.


“I’ve traveled, a LOT, seen many amazing places across the US and some out of the country too.”


As you can see, Meri did appear to reference Kody in her caption.


We have to assume he’s the “amazing partner” cited above, right?


I’ve made the BEST of friends.


I bought my old family home to share with my extended family (25 year dream come true). I’ve sung on a cruise ship. I’ve danced under the stars. I’ve swam with dolphins.


I’ve climbed mountains. I have nothing to complain about, it’s a good life!


Can’t wait to see what the next decade brings!


For nearly all of 2020, questions swirled about the state of Meri’s marriage.


She posted one cryptic meme after another, most of which painted the picture of a malcontent wife.


Clearly aware of the speculation out there, Meri then took followers by surprise in early December.


She basically told critics to shut their traps because she was in love.


“Let’s just clarify something here. I love this man. [blue heart emoji] I don’t owe anyone an explanation but I’ll do it anyway,” she wrote last month.


“I’m well aware that we, as a family, have chosen to put ourselves ‘out there’, which, in turn, brings about all kinds of speculation, commentary, and opinions.


“Sure we’ve had ups and downs through the years (I mean, isn’t that somewhat normal?) High highs and low lows. All of which, you get to see ‘some’ of, and speculate on. And that’s ok. You do you, boo.


“But here’s my truth. I love him. I love my family. I’m committed. I have 30 years in this. We struggle. We communicate. We repair relationships as the parties involved are willing and able.”


Brown went on to explain that while she is a wife, she is also independent and traveled a lot for work before the COVID-10 pandemic.


She is also a business owner who has multiple friends — who are both male and female.


“I won’t apologize for that. I’m human. I have feelings. I make mistakes. I rise when I’ve fallen. Sometimes it takes longer than other times to rise. I. Will. Always. Rise.


“I’m here. I’m committed. I’m not going anywhere. Don’t get your hopes up on that.”

Shahid Kapoor starrer Jersey to have a theatrical release this Diwali

Regular engagement with US beneficial for both countries: Pakistan
2021-10-08