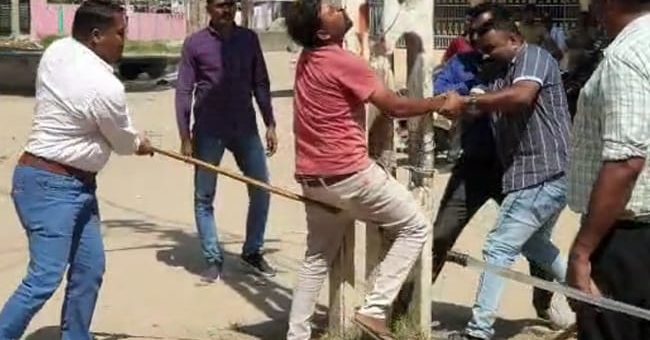 The flogging of some Muslim men, accused of disrupting a Navratri Garba event in Gujarat’s Kheda earlier this week, was done by some local cops, sources have told NDTV.

The viral video clips showed three men being tied to poles and beaten with sticks – allegedly by the policemen dressed in plain clothes – in Undhela village of Kheda district, while a crowd of locals clapped and cheered.

The men were also asked to apologise to the public.

Amid huge outrage over the videos, state police chief Ashish Bhatia ordered an inquiry into the incident yesterday.

“I have ordered an inquiry. We will take disciplinary action depending upon the gravity of the charges,” Ashish Bhatia told NDTV.

The panel investigating the incident will submit its report to the police over the next couple of days, sources said, adding that disciplinary action against the accused cops will be taken once the veracity of the videos is confirmed.

Several people, including women and a police official, were injured after some members of the Muslim community threw stones at the participants at the Garba event on Monday night, officials said.