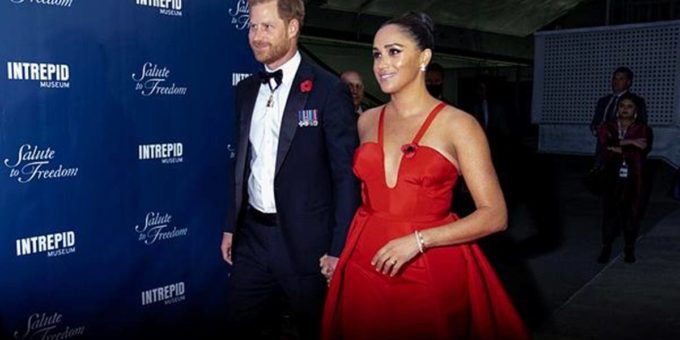 Prince Harry and Meghan Markle, who quit their royal life to settle in the US, have made a fashionable appearance in their first red carpet event in more than a year.

The Duke and Duchess of Sussex were photographed earlier this week at the Intrepid Museum in New York City ahead of Veterans Day in the US and Remembrance Day in the UK.

The couple welcomed their second baby, a girl, earlier this year, and has since stayed put at home, raising their kids. Their red carpet appearance, therefore, grabbed eyeballs and made headlines, mostly because of how stunning they looked.

Prince Harry wore a Giorgio Armani midnight blue wool-and-cashmere tuxedo, which was pinned with four medals. He also opted for a bow-tie, accessorising with a cross for ‘Knight Commander of Royal Victorian Order’, which hung around his neck.

Meghan, as usual, carried herself gracefully. She opted for a red gown by Carolina Herrera and matching heels by Giuseppe Zanotti. The asymmetrical gown with a plunging neckline added the extra glamour. She wore her hair in a neat high-bun, with her makeup both understated and elegant.

The couple also wore a red poppy, a symbol understood to have been used since 1921 to commemorate military members who have died in war.

The duke, who has served two tours in Afghanistan, was quoted as telling reporters, “My experience in the military made me who I am today, and I will always be grateful for the people I got to serve with — wherever in the world we were. But in war, you also see and experience things you hope no one else has to. These stay with us, sometimes like a slideshow of images.”

What do you think of their looks?