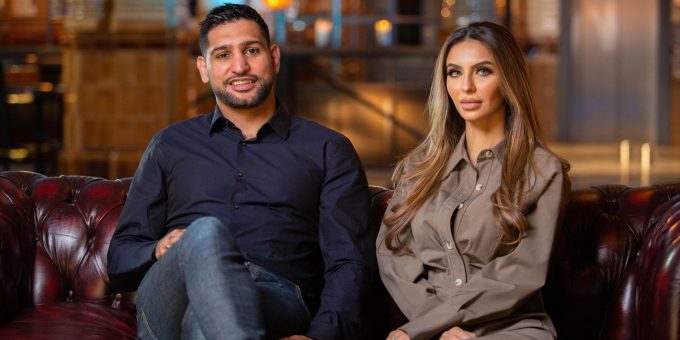 When this aired we were braced for some shock discussions and keen to learn something new about Bolton boxer Amir Khan and his wife Faryal Makhdoom. After all, it has been a roller coaster of a ride since they got married.

What transpired in this 8 episode series was something a little different.

The couple are far more ‘normal’ than most of us of expected. These type of shows tend to want to draw on distinctive personality traits and share ‘secrets’ in the hope it will keep people relevant. Nothing of the sort here.

The only gasp early on was the moment we learned that Amir had somehow lost millions of pounds on a wedding hall. The idea which seemed pretty good at the time but to lose so much money on a venture like that still boggles the mind.

The couple spend a lot of time on their phones. Well, they might well do as that is where they end up sharing their daily rituals.

Amir clearly needs to be back in the ring and mentions it every other sentence. And Faryal, we learn, wants to make sure her brand is successful so she can be her own woman.

Whilst Faryal and Amir remain centre stage it would have been good to see more of their relations. The visit to Faryal’s parent’s home in New York was revealing and it was good to see how a small-town boy like Amir and big city girl, Faryal, enjoy each other’s company within a wider family environment.

There must also be a golden rule before anyone takes part in these type of shows – ‘show off your wealth’.

Whilst some would want them to be more subtle, you only have to scroll through Instagram accounts and find every third person is trying to sell the same ‘success dream’. Some Asians in particular are now subconsciously passing on these fictitious ideals through their generations.

But there was one overriding issue that becomes quite apparent throughout – how social media is shaping people’s lives.

On top of the glare of the media the couple do seem to be another battle going on – something both Amir and Faryal allure to. The idea that they must be model Muslims  model Pakistanis and model citizens. The constant need to have to re-affirm their faith is not something they should have to do but we sense they must. It is almost as if they find it difficult being themselves in case they say or do something that will invite further criticism. Should they really need to worry about this so much when others clearly don’t?

Getting through the episodes for someone who does not watch reality TV shows will prove to be difficult. But rather than see it as somewhere we can find faults and raise our eyebrows at the young couple’s odd gripes. Maybe it is time we got off their back and realise they are a ‘normal’ celebrity couple whatever that normal might be.

Meet the Khans: Big In Bolton is available on BBC iPlayer