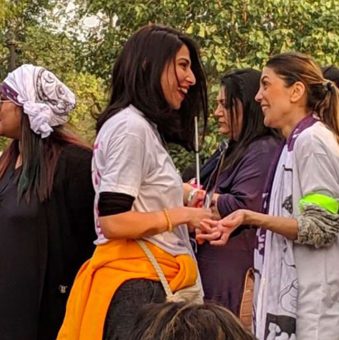 Singer Meesha Shafi and Leena Ghani are close friends so her false and malicious statements to damage Ali Zafar come as no surprise.

This was stated Barrister Ambreen Qureshi, the counsel of Ali Zafar, in a response to allegations made by make-up artist Leena Ghani in her defamation suit against Mr. Zafar in the High Court.

Barrister Ambreen Qureshi stated that Meesha had helped Leena establish her career as a makeup artist so saying Leena was not known to Meesha was a blatant lie. “Leena is also closely associated with Meesha Shafi’s lawyer Nighat Dad as one of the organisers of Aurat March,” Ambreen said.

The lawyer claimed that Leena had openly and publicly expressed hatred and hostility towards men and had been “found guilty” of running a smear campaign against Ali Zafar and falsely accusing him by the FIA alongside Meesha Shafi and seven others.

“Leena Ghani’s baseless and blatantly false allegations, which have been refuted by an eye witness already, seem like a desperate attempt to pressure Mr. Zafar into withdrawing his criminal charges against her as proceedings begin on 18th January 2021. The penalty for which can be up to three years in jail,” Barrister Ambreen said.

The Ali Zafar’s lawyer also said that there was also a pending criminal case against Ms. Leena under section 476 for filing a false affidavit in the honourable Lahore High Court and they would be filing Ali Zafar’s reply to Leena’s frivolous suit in Sindh High Court.

“Ali Zafar and his team are undeterred by these intimidation tactics and threats, and we will not allow for the honourable #metoo movement for genuine victims of harassment to be misused by a closely aligned group of friends and associates to further their agendas by using Ali Zafar as a scapegoat,” she concluded.