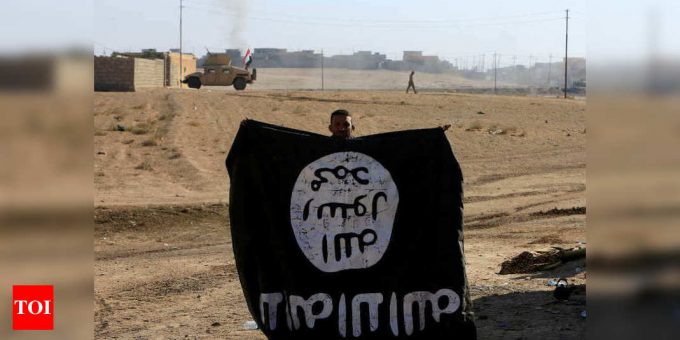 PARIS: With monikers as divergent as the “Professor” and the “Destroyer”, the Islamic State group’s new head has a reputation for brutality, but otherwise remains largely an enigma.
Amir Mohammed Said Abd al-Rahman al-Mawla replaced Abu Bakr al-Baghdadi after his death in a raid by US special forces last October.
Mawla was initially presented to the world by the Islamic State (IS) as Abu Ibrahim al-Hashimi al-Qurashi – a man about whom America and Iraq had little intelligence.
US officials later came to believe that al-Qurashi was Mawla’s nom de guerre, recognising him in March as the new head of IS.
The State Department immediately placed him on its “Specially Designated Global Terrorist” list, sparking a quest to learn more about a most-wanted man who now has a $10 million bounty on his head.
One thing everyone seems to agree on is Mawla’s brutal nature.
He is probably best known for playing “a major role in the jihadist campaign of liquidation of the Yazidi minority (of Iraq) through massacres, expulsion and sexual slavery,” according to Jean-Pierre Filiu, a jihadism analyst at the Sciences Po university in Paris.
The new IS leader was born, likely in 1976, in the town of Tal Afar, some 70 kilometres (40 miles) from Mosul.
He was born into a Turkmen family, making him a rare non-Arab to ascend the ranks of IS, which at its height ruled vast parts of Iraq and Syria and drew volunteers from the West.
His ethnic origins prompted the United Nations to predict in a January report that he might be a “temporary choice until the group finds a more legitimate ’emir’, a direct descendant from the Quraysh Hashemite tribe who could therefore command the full support of the remote provinces.”
Sharia jurist
Mawla graduated from the Islamic Sciences College in Mosul.
A former officer in the army of Saddam Hussein, he joined the ranks of Al-Qaeda after the US invasion of Iraq and Hussein’s capture in 2003, according to the Counter Extremism Project (CEP) think-tank.
He took on the role of religious commissary and a general Sharia jurist for al-Qaeda.
In 2004, Mawla was detained by US forces at the Camp Bucca prison in southern Iraq, where he met Baghdadi.
Both men were later freed, and Mawla remained at Baghdadi’s side as he took the reins of the Iraqi branch of Al-Qaeda in 2010, then defected to create the Islamic State of Iraq (ISI), later the Islamic State of Iraq and Syria (ISIS), also known as the Islamic State of Iraq and the Levant (ISIL).
In 2014, according to the CEP, Mawla welcomed Baghdadi to Mosul “before leaving al-Qaeda and pledged allegiance and full support to the radical’s mission, providing ISIS the support to quickly take control of the city”.
A profile drawn up by the CEP said that Mawla “quickly established himself among the insurgency’s senior ranks, and was nicknamed the ‘Professor’ and the ‘Destroyer'”.
He was well respected among IS members as a “brutal policymaker” and was responsible for “eliminating those who opposed Baghdadi’s leadership”, it said.
Down but not out
Analysts believe Mawla will now seek to prove he is his own man by attempting to reboot an organisation weakened by years of US-led assaults and the loss of its self-proclaimed “caliphate” in Syria last year.
And he may choose to act now that the US is withdrawing troops from Syria.
In a portent of things to come, IS fighters have carried out an attack every three days on average in Syria in recent months, according to the Washington-based Centre for Global Policy (CGP).
Hisham Al-Hashimi, a Baghdad-based specialist on the extremist movement who was assassinated in Baghdad this month, recently estimated the group’s monthly revenues in Iraq from investments and taxes it collects at some $7 million.
“Despite its serious losses in territory and manpower, it remains financially solvent, creative, lethal, and once again confident enough to threaten those who violate its principles,” CGP analyst Abdullah Al-Ghadhawi wrote.
This means Mawla has both the incentive and the means to assert himself.
“There are complaints about him from the field, there are still questions about what kind of organisation he will be running, how competent of a leader he is going to be, how successful he’ll be in reconstituting a caliphate, how inspiring he’ll be,” Seth Jones of the Center for Strategic and International Studies in Washington told AFP.
“There is going to be a lot of challenges, in inspiring the field but also avoiding to be killed like Baghdadi,” Jones said.
“If he is successful and recreates a caliphate, if the US withdraws its forces, if they’re able to capitalise in other countries, that could go a long way to reduce concerns about his background,” he warned.
While the group’s weakened position renders unlikely a major strike such as the 2015 jihadist assault on Paris unlikely for now, officials should not rule out smaller, less devastating but symbolic attacks on the West, Jones added.

Pakistan achieved its “highest demand and supply of power” in history: Hammad Azhar
2021-07-08