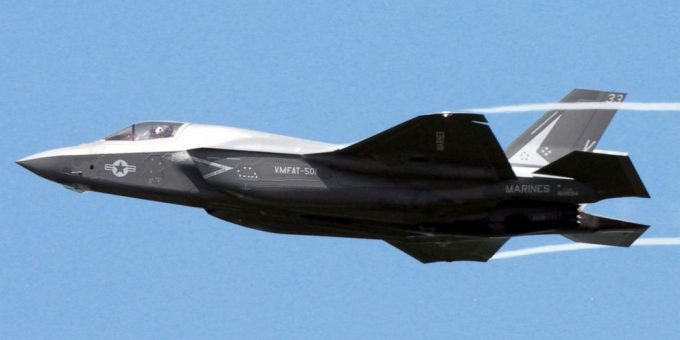 Two F-35 Marine Corps fighters will conduct a flyover of the White House on Wednesday to mark Polish president Andrzej Duda’s visit and Poland’s agreement to purchase the advanced aircraft from the United States.

The rare, if not unprecedented, White House flyover is the first for the U.S. military’s most advanced aircraft.

Speaking to reporters on Wednesday, President Donald Trump previewed the flyover, saying the fighters would make two passes over the White House before going “straight up,” motioning with his hand.

“They’re going to put on a very small show for us, but it’s going to be something,” he said.

The White House said the flyover partly recognizes Poland’s decision to acquire F-35s of its own, a long-sought-after purchase so that Warsaw could replace aging Soviet-era planes.

Trump said that Poland had agreed to purchase “32 or 35 brand new F-35s at the highest level.”

“In honor of today’s visit by President Duda of the Republic of Poland, two F-35 Joint Strike Fighter aircraft will conduct a brief flyover above the White House this afternoon,” confirmed White House Deputy Press Secretary Hogan Gidley in a statement. “We appreciate Poland’s plan to purchase this exceptional aircraft and welcome the opportunity for DOD demonstration pilots to showcase the F-35 while logging required training hours.”

The F-35s are flying to the nation’s capital from Marine Corps Air Station Beaufort in South Carolina. They’re expected to fly low and slow over the White House South Lawn just before 2 p.m. EST at about 1,000 feet and 115 miles per hour, one official said.

That would be shortly before Trump and Duda are scheduled to hold a news conference outside in the White House Rose Garden.

Trump has described the F-35 stealth aircraft as “invisible” and has personally intervened with the aircraft’s producer Lockheed Martin to lower the cost of the program.

In addition to the F-35 sale, Trump said on Wednesday that as many as 2,000 U.S. forces could rotate through Poland from U.S. bases in Germany.

The announcement of further U.S.-Poland military cooperation is not expected to include the establishment of a U.S. base in Poland, dubbed “Fort Trump,” which was originally proposed by the Poles to counter Russian aggression, that official confirmed.

Trump told reporters that talks continue around a possible U.S. base, saying, “We haven’t finalized anything.”

There are already 4,500 U.S. troops that rotate through Poland as part of NATO. The U.S. is also helping to construct a missile defense base in Poland, which aims to defend U.S. and European allies from a “rogue” missile threat, namely Iran.

Country is going through a tough phase: Abdul Hafeez Shiekh

How To Grow Hair on your Forehead?

Delhi Man Arrested For Routing Funds To Kashmir For Acts Of Terror: Cops
2022-08-20