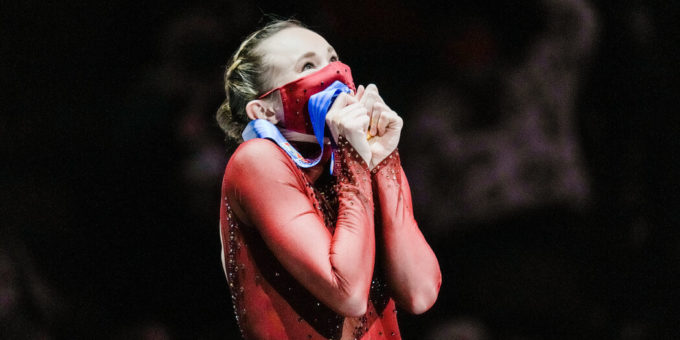 NASHVILLE — Mariah Bell, a newly minted national champion, needed a reminder that she has been around figure skating for a long time, somehow, someway outlasting battalions of teenagers in a sport that skews so young.

“Have I been a senior for nine years?” she asked a room of reporters late Friday night, looking incredulous and referring to the senior level of skating, which is the top level of the sport.

A sea of heads nodded back at her.

After years of surviving a demanding sport with her mental and physical toughness, and after years of watching other top skaters come and go, Bell, 25, won her first U.S. national championship on Friday, becoming the oldest female national singles champion in 95 years.

Her victory made it likely that U.S. Figure Skating would announce her name on Saturday afternoon as one of three female singles skaters who will represent the United States next month at the Winter Olympics in Beijing, where the Russian women are heavy favorites and could perhaps sweep the medals. If named to the team, Bell would be the oldest American female Olympics singles skater since 1928.

With her gold medal finally in hand, and after a stressful and chaotic week at nationals, Bell savored her victory and exhaled long and hard. It had been a rough few days.

The top American skaters have been on edge at nationals, and not only because Olympic berths are at stake. They have been practicing and competing here in Nashville just as the highly contagious Omicron variant of the coronavirus sweeps across the country and the world, less than a month before the Beijing Games.

Get Ready for the 2022 Beijing Winter Olympics

Just months after Tokyo, the Olympics will start again in Beijing on Feb. 4.

Competitors have been doing their best to protect themselves by wearing masks, getting tested and trying to avoid crowds (which is not easy with thousands of spectators in the arena). They are aware that testing positive for the virus could keep them out of the Olympics and ruin their lifelong dream.

Despite those precautions, at least six skaters tested positive this week and withdrew from nationals, including Alysa Liu, who was considered a favorite to make the Olympic women’s team because of her strong showing this past season on the international circuit. Liu, 16, won her first senior national championship at age 13 in 2019, and she won again in 2020. (Bradie Tennell, the winner in 2018 and 2021, withdrew from this year’s competition with a foot injury.)

Amber Glenn, among the top skaters being considered for the Olympic team, also tested positive on Friday, the day of the free skate. On social media, she said she had felt ill for a few days but thought it was just nerves or maybe allergies.

On Wednesday, Brandon Frazier, who skates with Alexa Knierim in pairs, tested positive after waking up with symptoms. Frazier and Knierim are the top-ranked pairs team in the United States.

And on Saturday morning, three more competitors at nationals — one men’s singles skater and an ice dancing team — tested positive, but none were realistically in contention for the Olympic team.

Fortunately for those skaters who had to withdraw from this last big competition before Beijing, the national championship is not an Olympic trial event, as it is in some other sports, where the top finishers earn automatic berths onto the U.S. Olympic team. When choosing the Olympic squad, U.S. Figure Skating officials will consider how competitors placed at this event, but they will also evaluate the skaters’ performances over the past year or so.

Because of those criteria, Liu, who watched Friday’s free skate from her hotel room while in isolation, is still likely to make the Olympic team. The same goes for Frazier and Knierim. The championship skates for pairs, ice dancing and men’s singles were scheduled for Saturday and Sunday.

It remains unclear, though, how long it will take potential Olympians battling the virus to feel better or to begin testing negative, only adding to their stress.

Many competitors are planning to leave for China in just over two weeks, and they must follow strict rules, including testing negative for the virus, to be allowed into the country. In some cases, people who have contracted the virus have continued to test positive for weeks.

On social media on Friday, Liu said she was feeling good mentally and physically and wished her fellow skaters good luck in the free skate. Earlier in the week, Frazier said he was feeling awful, with severe symptoms.

Those positive tests shook the top female skaters. Karen Chen, the 2017 national champion and 2018 Olympian from Fremont, Calif., said she had to take a moment to address her worries after realizing that Liu, who was scheduled to skate in the final group with her on Friday, wasn’t at the rink.

“The news was very, very shocking and it’s super unfortunate to hear,” said Chen, who finished 11th at the 2018 Olympics and has placed fourth at two world championships. “I gave myself like 10 minutes to just full on freak out about it. I told myself, OK, you can think about this for 10 minutes and after that, you’ve got to focus on your skating.”

Chen, 22, skated with the flair and confidence of an Olympic veteran on Friday, a showing good enough to finish just behind Bell and very likely solidify her chances for Beijing. Winning the silver medal at nationals was a thrill, she said, laughing, because she had won a gold at nationals once before and had also won the bronze three times. The silver medal was the only medal she was missing. Now she has a complete set.

Isabeau Levito, from Mount Holly, N.J., finished third with a performance that received a standing ovation, but it didn’t help her chances to make the Olympic team. At 14, she does not meet the age requirements to compete in a Winter Games, but she didn’t seem down about it.

Performing so well at nationals, she said, made her feel a “great sense of light, warmth and happiness to see that people like what I’m doing.” The Olympics in 2026 are on her radar, though.

Bell, who is from Westminster, Colo., can remember those days when she was a young teenager, training for the sport that she had nearly quit several times.

Once, she recalled, her parents had bought her a package of skating lessons and she told them that she didn’t want to take lessons anymore. Her parents said, “That’s fine.” They never pushed her into the sport, and that actually nurtured her love for it, she said.

On Friday, that love for skating permeated Bell’s performance. During her elegant and ethereal free skate to K.D. Lang’s “Hallelujah,” she smiled and glowed, making even the most challenging elements seem simple. In her sparkly burgundy dress, she looked like a prima ballerina spinning and floating above the ice, landing her triple and double jumps again and again.

Later, Bell acknowledged that she is indeed “ancient” for women’s figure skating. But the important thing, she said, is that she doesn’t feel old. Why should there be an expiration date for skaters if they are still having fun?

“I want it to be a known fact that skating doesn’t end at a certain age,” she said.

Malaika Arora Mid-Week Indulgence Includes A Classic Comfort food; Guess What it is? (Pic Inside)
2022-01-18